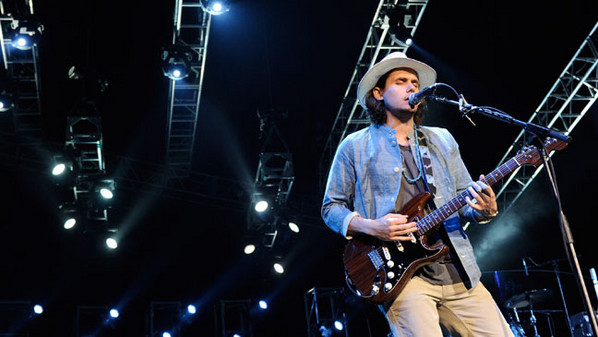 It's been two years since John Mayer last toured the U.S., but this April the singer/songwriter will be hitting the road in support of his upcoming album, "Born and Raised." But wait there's more: Mayer posted a 60 second clip of the record's first single, "Shadow Days," on his Tumblr, with the whole song set to go out to radio on Monday.

Details of Mayer's fifth record also emerged: Produced by Mayer and Don Was (Rolling Stones, B.B. King, Bonnie Raitt, among others), the album's title-track will also feature David Crosby and Graham Nash on backing vocals, providing what will surely be some delicately awesome harmonies. No release date has been announced, but a press release suggests that the album will drop soon after the tour wraps up on May 6. Based on the steel-guitar laced clip of "Shadow Days," along with the cover of a sillhouted, bearded Mayer donning a ten-gallon hat, it looks like the singer is embracing his inner cowboy on this record.

The tour kicks off April 9 at the IU Auditorium in Bloomington, Indiana, and will hit 18 cities in total. Mayer will be accompanied on tour by Chuck Leavell--a veteran keyboardist/pianist who's played with everyone from Eric Clapton to the Rolling Stones to the Allman Brothers Band--as well as former collaborators Aaron Sterling (drums) and Sean Hurley (bass).

The press release also noted that he has partnered with the North California Institue of Research and Education (NCIRE), which provides programs to help U.S. veterans readjust to civilian life. Concertgoers will be able to purchase tickets in a specific section through Tickets-For-Charity, while Mayer has also set up an auction on eBay where fans can bid on front row tickets and a chance to meet the singer, with the proceeds of both going to the NCIRE.

View the tour dates below: