By FNN | February 25, 2012, 11:48pm IST
Summary: Springsteen and the E Street Band will appear on the NBC late-night show twice during the week of Feb. 27; Kenny Chesney and Elvis Costello to perform. 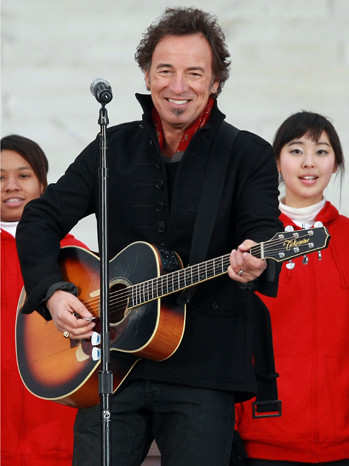 After Broadway week ends, Late Night With Jimmy Fallon will pay tribute to Bruce Springsteen during the week of Feb. 27.

In support of Springsteen's new album, Wrecking Ball, the NBC late-night show will have its musical guests perform select songs from his catalogue. Springsteen, along with the E Street Band, will drop by Monday, Feb. 27 with two performances before capping off the week on Friday, March 2, with an interview segment and several songs.

On Tuesday, Feb. 28, Kenny Chesney will perform "I'm on Fire," from Springsteen's Born in the U.S.A. CD. Chesney covered the song for his album, When the Sun Goes Down, released in 2004.

Elvis Costello will perform "Brilliant Disguise" with The Roots on Thursday, March 1.

During a November 2010 appearance, Fallon -- in costume as Neil Young -- and Springsteen sang Willow Smith's "Whip My Hair."

Wrecking Ball will be released March 6. Springsteen will embark on a world tour beginning March 18 in Atlanta.

Late Night is produced by Universal TV and Broadway Video.