By FNN | February 2, 2012, 12:13am IST
Summary: The music channel takes issue with the explicit nature of the footage for the rapper's new song "Stupid H-e," according to a report.
Loading the Player... 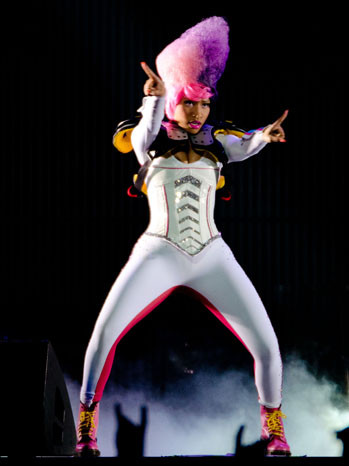 Has Nicki Minaj been banned at BET?

According to TMZ, the music network has banned the rapper's new music video for her song "Stupid H-e" after deeming it too raunchy.

In the clip, directed by Hype Williams, Minaj -- sporting her signature cartoonish outfits -- repeats the title lyrics along with other explicit words, while writhing around in a cage, among other behavior befitting her manic-vixen persona. Among the song's tamest rhymes: "I'm Angelina, you Jennifer/ C'mon b--h, you see where Brad at."

Meanwhile, an image of a bare behind -- a clear tribute to Minaj's famous derriere -- flashes repeatedly on the screen. (If the report of BET's refusal to air the video has any weight, that might have had something to do with the channel's decision.)

A BET representative did not immediately respond to a request for comment.

As for the video, judge for yourself (WARNING: NSFW)
Kick off your day with Funrahi's daily e-mail newsletter. It's the freshest entertainment news, gossip and box-office reports, served hot. Get it.
Don Cornelius Tribute to Air on VH1
Music Choice Rebrands With New Name, Logo