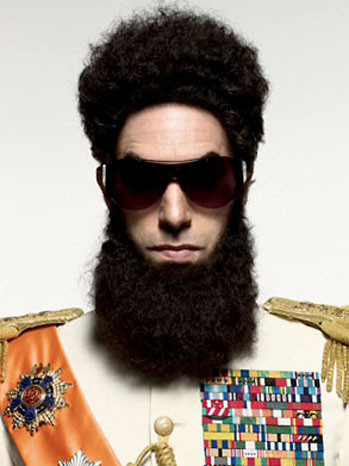 The movie commercial spots for the Super Bowl just keep on coming.

While teasers for the trailers that will air during the Super Bowl have been released for John Carter and The Avengers, and a full ad for G.I. Joe 2: Retaliation has already it the web, none of these quite have the, um, authority that The Dictator Super Bowl spot has.

The 30-second spot starts of with a montage of infamous now-dead dictators, including Saddam Hussein, Moammar Kadafi and Kim Jong Il.

And then, Sacha Baron Cohen's dictator appears on screen.

"Hey America, I just bought NBC. I know the final score. Enjoy the game," he says.

The rest of the clip contains footage that was available in the original trailer, including a bedroom tryst with Megan Fox and a shootout on the track field.

Borat and Bruno director Larry Charles returns to help The Dictator, which tells the tale of an evil ruler of a fictional third-world country who is exiled to the U.S. The film is inspired by the novel Zabibah and The King by Saddam Hussein.

Kick off your day with Funrahi's daily e-mail newsletter. It's the freshest entertainment news, gossip and box-office reports, served hot. Get it.
Katy Perry in Talks With Paramount For 3D Movie
Madonna Cuts Daughter Lourdes From 'W.E.' Scene