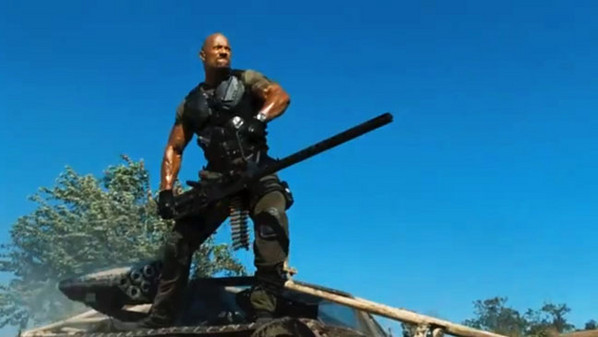 In advance of its broadcast during the Super Bowl on February 5, Paramount released their G.I. Joe 2: Retaliation trailer online today. The 30-second clip features Dwayne "The Rock" Johnson mobilizing the film's team before it goes into action in a fast-paced montage of footage.

The first theatrical trailer for Retaliation premiered on December 20, 2011, and immediately revealed that the film would only partially continue the story from the first one. In that clip, Channing Tatum and his team are evidently wiped out by an attack from COBRA, leaving behind only Snake Eyes (Ray Park), Johnson's character, Roadblock, and a handful of newcomers, including Lady Jaye (Adrianne Palicki). In the new clip, fans get a closer look at COBRA Commander, whose helmet resembles the snake-headed hood of his cartoon successor, Serpentor, and reveals that Storm Shadow survived the first film to fight the Joes again. And while the first trailer showed Bruce Willis as a member of the Joe team, this clip revealed that his name is in fact "Joe."