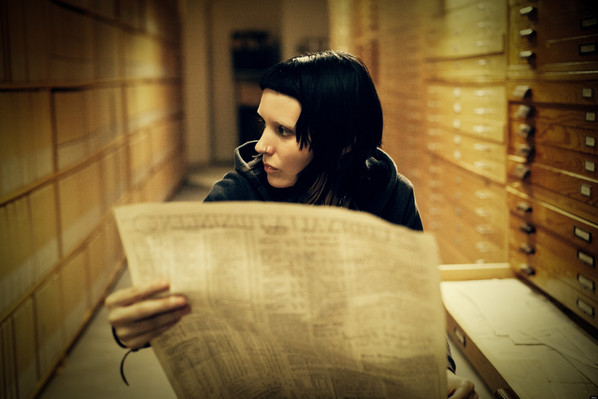 David Fincher may not have any use for movie trailers or promotion, but the marketing people at Sony pushing "The Girl With The Dragon Tattoo" have other ideas. The Oscar-nominated director can take solace in the fact, however, that at least the film's viral campaign follows his own dark and mysterious style.

A new video found at the "Dragon Tattoo" tumblr site, Mouth Taped Shut thrusts fans into the brooding and gritty past that Mikael Blomkvist, the journalist portrayed by Daniel Craig in the film, is seeking to uncover. The video features an elaborate re-creation of the old syndicated tabloid mystery show "Hard Copy," with an over nine minute segment looking into the death of Harriet Vanger. Using editing tricks to make it look like it's been transfered from a number of VHS tapes over the years, the "segment" probes the questions of Hedeby Island, with an angry neighbor leading the charge.

The video sets up the mystery that Craig and Rooney Mara, who plays hacker/investigator Lisbeth Salander, will take on in the film. It also marks another step toward opening the film up for public inspection ahead of its late December release date; in addition to the viral content, Craig has begun giving interviews -- however reluctantly -- to promote the movie.

Amongst his recent interviews, Craig spoke about his investigator character and more.

"What I like about him is that he's flawed, he's a complex, weak, egotistical man on a moral crusade," he said. "And all those things combined are interesting, plus he has this brilliant relationship with this girl, Lisbeth Salander, this damaged, hyper-intelligent human being. On paper, they shouldn't come together, but they do and they respond to each other. She's the one with the balls in the relationship. He's happy to watch while she beats someone up."

The relationship, of course, is spelled out in the original books and, subsequently, the film's adapted screenplay, but Craig also thinks the choice of Mara to play Salander was crucial.

"There were shenanigans going on while she was being cast," Craig remembered. "David Fincher was adamant and I get that. Just look at the beginning of 'The Social Network,' she's phenomenal. She's got something about her, but also she's physically perfect. When she puts the hoodie on and the leather jacket, she looks like a 14-year-old boy, she looks sexless. Which is perfect. The other side of it is that when she doesn't have that on, she's really sexy."