Katy Perry in Talks With Paramount For 3D Movie

By FNN | February 2, 2012, 12:18am IST
Summary: The studio has initiated talks with Perry's camp, as well as Imagine Entertainment, to create a documentary-style 3D film including performance footage of the powerhouse singer-songwriter. 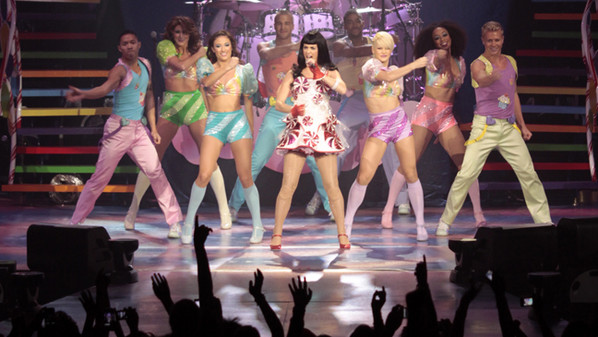 Pop sensation Katy Perry could be headed to the big-screen—and in 3D, to boot.

Paramount has initiated talks with Perry's camp, as well as Imagine Entertainment, to create a documentary-style 3D film centered on the powerhouse singer-songwriter.

Dealmaking is still in the early stages, and no director is officially on board yet. But both sides are eager to make the details work, and insiders say it's just a matter of working out the logistics. A source close to the dealing says Paramount wants to use the model it employed for its successful concert film featuring Justin Bieber, Justin Bieber: Never Say Never. That film, released February 11, 2011, holds the domestic box office record for a concert film with $73 million. (The worldwide record is held by Michael Jackson's This Is it, which grossed $261.2 million in 2009.)

After a long absence, concert films have come back in vogue in recent years, especially those that focus on young-skweing acts and include a documentary aspect allowing fans into the personal lives of the stars. Disney's Hannah Montana/Miley Cyrus: Best of Both Worlds Concert Tour started off the new wave in 2008, grossing a surprising $65 million. A year later, Disney repeated the success with Jonas Brothers: The 3D Concert Experience. This Is It and Never Say Never followed.

However, not every effort has been a success. Fox's Glee the 3D Concert Movie, released in August, was the last concert movie to hit screens. It's weak $11.8 million performance was blamed on Glee overload.

Perry could prove to be an ideal subject for a documentary-style concert film. Not only is she a top-selling act, her core audience consists of teen girls, the same demo that made the Bieber, Cyrus and Jonas Bros. films successful. On top of that, her performances and style are so colorful and visual that they may lend themselves to the cinema experience.

Perry is repped by CAA and Direct Managment Group.