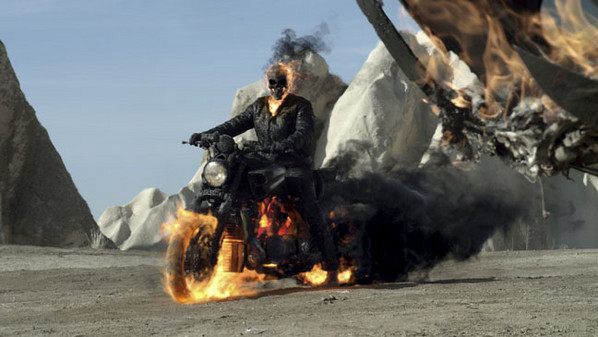 A water-treading sequel offering just enough kooky color to keep less-discerning funnybook fans occupied, Ghost Rider: Spirit of Vengeance nudges its obscure hero's mythology forward a bit without seeming to care much how it gets there. Its modest box office prospects are helped by the absence of other superhero competitors over the next couple of weeks.

Returning as the eponymous not-quite-hero, Nicolas Cage spends stretches of the film on autopilot while waiting for scenes he deems worthy of his particular brand of crazy. They're not frequent enough to please the Cage aficionado, but sequences in which the twitchy, inappropriately giddy actor tries to choke back transformations into a bloodthirsty skeleton-on-fire are welcome in a film where often-charismatic costars Ciarán Hinds and Idris Elba are singing off-key.

Cage's Johnny Blaze hates being saddled with his super-powered alter ego, and Spirit of Vengeance gives him a chance, á la Superman II, to unburden himself: A French motorcycle-riding monk (Elba, wearing unfortunate green contact lenses) offers to lift the curse if only Blaze will rescue a boy being pursued by the devil. It seems the boy, Danny (Fergus Riordan), is actually the spawn of the dark lord's Earthly incarnation (Hinds's Roarke, the trickster responsible for Blaze's curse), and is now meant to be possessed by Daddy for good.

Directors Mark Neveldine and Brian Taylor enjoy some of the oddball moments in Ghost Rider's battles with various generic villains -- they can't bring the flaming skeleton head to life, but shots of its gaping maw taunting evildoers have a quirky funhouse quality, and somebody in a digital FX house should get a bonus for the bubbling tar on Ghost Rider's motorcycle jacket. But the actual action surrounding these moments is sometimes incoherent, especially an extravagantly murky showdown involving a mammoth piece of construction equipment, and the plot tying one confrontation to the next is anything but on fire.

If the screenplay is stale and contrived (Elba's monk knows everything about everything, but can't guess the one twist no viewer will fail to foresee), the picture benefits from some eye-candy settings in Turkey and Romania -- which is not to say that this scenery is well served by Brandon Trost's photography or the limp 3D effects.

Kick off your day with Funrahi's daily e-mail newsletter. It's the freshest entertainment news, gossip and box-office reports, served hot. Get it.
Meteora: Berlin Film Review
'Adventures of Tintin' Coming to Blu-Ray and DVD March 13