By FNN | February 13, 2012, 11:42am IST
Summary: Writer-director Spiros Stathoulopoulos’ story follows an illicit romance between a Greek Orthodox monk and a neighboring nun. 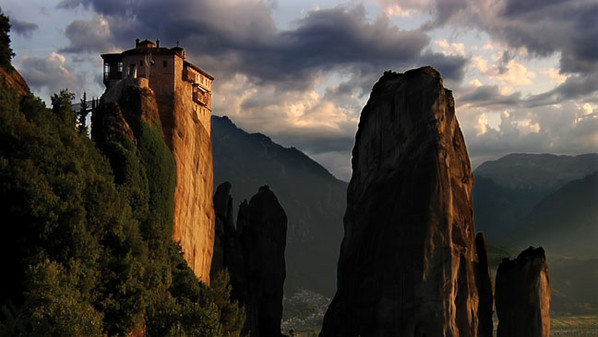 BERLIN -- Spiros Stathoulopoulos' story of illicit love between a Greek Orthodox monk and a neighboring nun is less a Meteora than a UFO, and one that definitely takes its time to get off the ground. The writer-director offers up some intriguing visuals and locations, but his film is way too minimalist and experimental to orbit far outside the fest circuit. Otherwise, fans of HBO's True Blood may be surprised to find Theo Alexander in a lead role that requires lots of praying but only a bit of dialogue and never quite convinces in this meditative study of lust and religion.

Set almost entirely in and around the titular hilltop monastery - which dates to the 9th century and is one of the largest structures of its kind in Greece - the threadbare, present-day plot is centered around a nameless monk (Alexander), and the nun (Tamila Koulieva) who lives in a convent on the opposing cliff. Although they only exchange a few words in the film's opening scene, the two soon begin to reveal an immense longing for each other. After beating around the bush for nearly an hour, one of them decides to make a move.

The tale of holy devotion running up against innate physical desire is nothing new in movies, but unlike some of the genre's more extreme and accomplished examples (Bunuel's Simon of the Desert and Scorsese's The Last Temptation of Christ come to mind), Meteora remains all too vague and understated and clearly prefers symbolism over storytelling. This makes whatever sparks are meant to fly in the final act feel like mere flickers, and despite a few racy moments (which are more softcore than highbrow), there's never a true feeling of spiritual risk, let alone deep emotion.

Part of this may come from Stathoulopoulos' insistence on inserting scenes of low-fi, Byzantine-style animation between the live-action sequences, hoping perhaps to communicate the interior battles of the protagonists. Instead, such moments break up the action and seem altogether hokey and are only partially salvaged by a soundtrack that includes a few transfixing monastic chants.

Making the most of the prehistoric-looking setting and grandiose weather conditions, the director-cinematographer (whose single sequence-shot hostage drama, PVC-1, played in the Directors' Fortnight at Cannes) opts for long takes and a Scope format to milk the location for all it's worth. But the use of what looks like consumer-grade HD, which goes soft in the interiors and video-ish outdoors, doesn't create an aesthetic grandeur on the level of Carlos Reygadas' Stellet licht - a film about monks where such silence is truly golden.