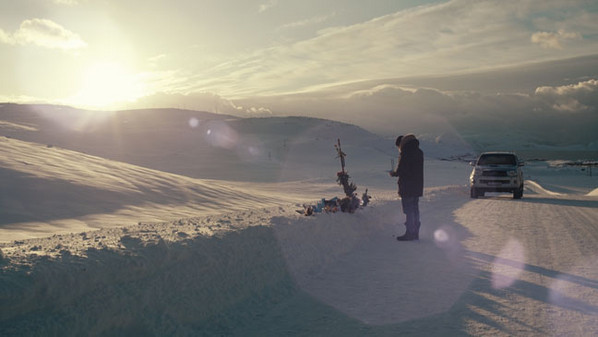 Guilt and redemption in the dark Scandinavian winter are examined to death in Mercy, a slow-paced, brooding drama about the aftermath of a hit-and-run car accident that returns to some of the favored themes of German director Matthias Glasner. Set in the extreme climate and austere beauty of the Arctic Circle, the film refuses to follow its promise of adventure, preferring to use its extravagant scenery as a grand, metaphoric backdrop to intimate drama. But stalwart audiences who don't mind sitting through two hours of angst could latch on to its urgently told, if sometimes contrived, story.

More narratively accomplished than Glasner's confused child abuse drama This Is Love, Kim Fupz Aakeson's script tips the scales in the other direction, toward the overly pat and familiar. It often feels like watching a morosely acted, by-the-books drama that has been upgraded by extraordinary locations. Lacking any poke at the historical or social background of the Far North, so poignantly captured in the work of local director Knut Eric Jensen, Mercy remains the story of outsiders and guest workers in a wintry world that is a colder, prettier version of Germany.

In an expository prologue, the screen splits in three to show engineer Niels, his wife Maria and their son Markus as they prepare to relocate to Hammerfest, Norway, where Niels (gaunt-faced Glasner regular Jurgen Vogel) is to assume a post of responsibility at a natural gas plant. The snowy coastal town is a picture postcard for "polar nights," the two months of the year when the sun doesn't rise and the land remains in darkness. The high-tech gas plant, surrounded by menacing choppy black water, promises all sorts of emergencies to come, but disappointingly, it is immediately abandoned for a domestic drama of the most obvious kind. Niels, whose marriage is already shaking from his last extramarital affair, starts seeing his attractive Norwegian co-worker Linda (Ane Dahl Torp) after hours. Maria (Birgit Minichmayr), meanwhile, finds a heart-sinking job at a hospice full of dying patients.

Driving home late one night, she hits something on the snow-packed road. Courage fails her and she drives home in a panic, without checking to see what it is. Niels goes back to look but in the dark can find nothing. Later, to their horror, they learn Maria has killed a 16-year-old local girl. Hiding the "terrible mistake that won't come undone," they plunge into a nightmare of fear and guilt that Glasner accurately and painfully depicts. The film is again on-target when it shows how the tragedy brings them closer and mutual suffering heals their marriage. These are some of the film's best moments, in which it hits a psychological payload. Effectively commenting on the tension is the local community choir where Maria sings, along with the parents of the girl she has run over. The haunting voices and piercing northern melodies conjure up a collective ritual of yore while suggesting a spiritual dimension to the characters' dilemma that will emerge, with great naturalness, in the final reel.

The acting, particularly that of leads Vogel and Minichmayr, is admirable throughout, though to pick hairs, there is something a little forced about its insistent realism that leaves no shadow of a doubt about their feelings or intentions. An interesting exception is young Stange as the unnervingly silent son. Always secretly taping the family in its intimate moments with his little DV cam, he seems to have stepped out of Michael Haneke's Hidden. But the menace posed by his spying is never used in any significant way, and it turns out to be one of the story's several red herrings.

The landscape is truly magnificent and moody in Jakub Bejnarowicz's polished cinematography, featuring images a big snowy rock sticking out of the harbour like the great white whale. A magical music score by Home Sweet Home is used subtly and with feeling.

Kick off your day with Funrahi's daily e-mail newsletter. It's the freshest entertainment news, gossip and box-office reports, served hot. Get it.
'Adventures of Tintin' Coming to Blu-Ray and DVD March 13
SAG, DGA and PGA Announce Dates for 2013 Award Ceremonies