By FNN | February 13, 2012, 11:18am IST
Summary: A dramatization of Genoa's violent G8 Summit hopes to jump on the Occupy bandwagon but comes off more like a stilted TV movie. 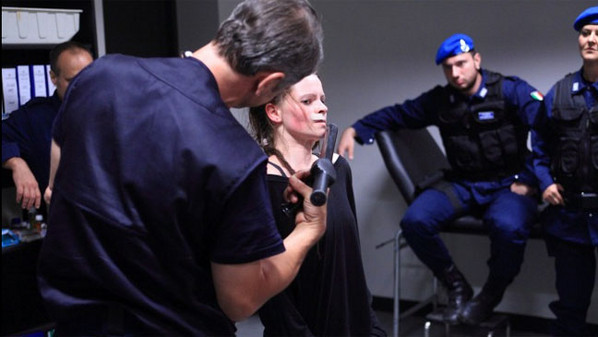 The well-chronicled police brutality against protesters at 2001's G8 Summit in Genoa is clunkily dramatized in Diaz - Don't Clean Up This Blood, a trumped-up TV-movie whose limitations are thoroughly exposed by the big screen. Though mainstream in style and notable for some extended scenes of harrowing, bloody violence, niche play at human-rights festivals is the most likely fate for this overlong, awkwardly-structured peek behind half-forgotten headlines. TV sales are also a possibility given the media-attention recently enjoyed by such movements as Occupy and the '99%', but outside Italy commercial prospects are minimal.

An Italian-Romanian co-production, Diaz is named after the temporarily vacant city-center school used by protest-groups as makeshift base and dorm during the mid-summer economic conflab. A Euro equivalent of Stuart Townsend's commercially-disappointing G8 picture Battle in Seattle (2007), it features a multinational, multi-lingual cast playing the bohemian twentysomethings on the receiving end of the carabinieri's boots, fists and nightsticks. Among the sprawling ensemble - including Italian marquee-draw Elio Germano as one of several admirably-heroic journalists - the closest to a lead is Antonio Gerardi's Achille Faleri, who's among the very few of the boys in blue to be depicted as anything other than a bloodthirsty, Fascistic thug.

Stern, moustachioed Faleri is thus the conspicuously 'good apple' in what's by any measure a rancidly rotten barrel - as the protracted end-titles solemnly inform, dozens of cops were in 2010 found guilty of various abuses and offenses committed on the night in question. This includes - as we see - the planting of evidence to back up false claims that the cops met "fierce resistance" in their raid on what was supposedly a hive of 'Black Bloc' anarchist extremists.

But despite a patience-sapping two-hour running-time, by the end we're not much the wiser about who exactly was to blame for the horrifying assaults that took place at the Diaz school - and later at the police-station where the battered-and-bloodied protesters were taken for further pummelings. There's one particularly powerful, sinister and culpable and gray-haired gentleman in a suit whose orders seem to have been crucial in the situation going so horribly awry, but otherwise all we get is a carabinieri officer baldly informing Faleri that he "can't hold his men back."

The latter's chief structural gimmick is to at several points rewind the action to the minor daytime incident which in retrospect triggered the whole atrocity - a bottle casually thrown by a protester at a police-car. This sequence is shown on four occasions in lingering slow-motion, an unfortunate decision as the crucial bottle is rendered by tackily cheap-looking CGI.

Kick off your day with Funrahi's daily e-mail newsletter. It's the freshest entertainment news, gossip and box-office reports, served hot. Get it.
The Wall: Berlin Film Review
More Movies News