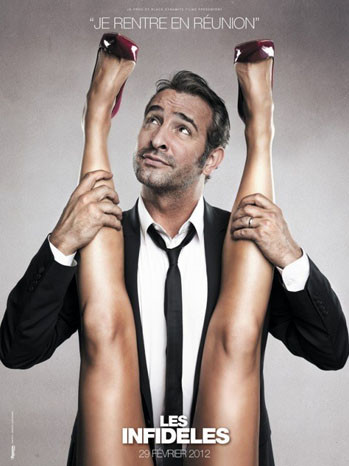 PARIS -- Hot off the Oscars and into the bedroom comes The Players (Les Infideles), a raunchy collection of adultery-themed shorts written by, starring and hatched from the mind of best actor laureate Jean Dujardin. Teaming up with The Artist's Michel Hazanavicius and a handful of rising Gallic filmmakers, Dujardin and fellow two-timer Gilles Lellouche (Point Blank) offer up a slick, occasionally hilarious but ultimately uneven appraisal of France's favorite extramarital pastime.

Released on home turf just days after the Academy Awards, Players should bring in sizable booty in its first frame, followed by solid ancillary and strong showings in Francophone territories. However -- and as much as it could attempt to coast on its creator's tremendous stateside success -- the film's explicit and, some would say, highly continental depiction of sex and marriage may have a tougher time convincing the kind of upmarket viewers who think that movies with subtitles are supposed to be affairs of the intellect.

Otherwise, there are plenty of affairs of the other sort in this rollicking omnibus film that, even when it leaves behind all the nooky jokes and butt shots (Dujardin's included) to tread in more serious waters, is never much more than an extended sketch comedy whose longer segments tend to wear out their welcome. There are nonetheless a few clever and undeniably funny moments that make the trip somewhat worthwhile, and the charisma of its two leading men -- who switch up roles, hairstyles and even sexual preferences -- adds much to the formula.

Kicking off with a racy prologue (by Fred Cavaye, Point Blank) that sets the tone for much of what's to come, we're quickly introduced to serial cheaters Fred (Dujardin) and Greg (Lellouche) as they spend a night on the town doing what they do best, and with absolutely no regrets. Although we return to the pair during a closing Las Vegas-set segment directed by the actors themselves, the rest of the film features the duo playing various characters in assorted extracurricular situations, some of which are unapologetically sexist, others that attempt to reveal the darker sides of carnal desires.

Of the latter bunch, Hazavanicius' La Bonne Conscience is certainly the most memorable: Not only does it feature Dujardin playing against type as a corporate lackey trying to score during a dreary business convention, but its tone and message are a clear about-face from the team's previous collaborations (including their two OSS 117 spy spoofs). Stylistically, it's also a far cry from the ultrapolished Artist, with the director and regular DP Guillaume Schiffman (who shot the other shorts as well) offering a pared-down, realistic look to capture a lackluster motel setting.

Another more solemn story is told in La Question (by actress-writer Emmanuelle Bercot, Polisse), which has Dujardin and real-life wife, Alexandra Lamy, facing off as a long-married couple revealing their infidelities during an all-night confession session. Although this bit never quite convinces, it offers the actor an occasion to shift gears, as does a segment titled Lolita (by Eric Lartigau, The Big Picture), which has Lellouche playing a sugar daddy who can't quite hold on to his goods.

The pace picks up nicely during a few spotlike segments (used as actual teasers for local promotion) scattered throughout and whose assorted characters -- including a preppy philanderer played by Guillaume Canet -- eventually come together in the film's most outrageous short, Infideles Anonymes. Starring Sandrine Kiberlain as the leader of an AA-type support group whose attendees are certified adultery addicts, its over-the-top premise is held on solid ground by music video director Alexandre Courtes (whose debut feature, The Incident, will be released by IFC Midnight in the spring).

Working along with Lellouche and three co-writers, Dujardin seems to be returning here to the type of shortform comedy that launched his career, when the TV series Un gars, une fille made he and Lamy household names. To that extent, Players reveals that the award-deluged actor can combine creativity and charisma to provide a certain level of laughs -- and even some gravitas. But the enterprise is only as sustainable as its outlandish premise, and it eventually plays out like only an above-average addition to French cinema's long-standing fling with unfaithfulness.