By FNN | February 13, 2012, 11:15am IST
Summary: In Julian Roman Pölsler's psychological drama, Martina Gedeck portrays a woman who becomes isolated by a force-field while visiting a mountain valley. 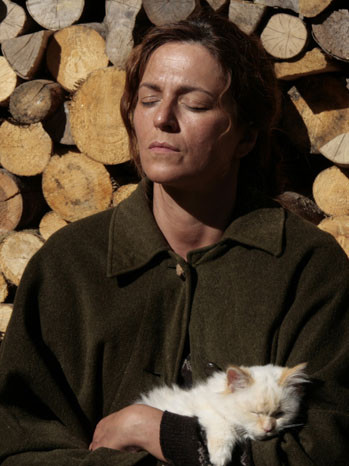 Man's best friend turns out to be a woman's too in Austrian mindbender The Wall (Die Wand), an austere slice of philosophical-psychological sci-fi whose heroine becomes isolated by a force-field while visiting a mountain valley. Spectacular in its evocations of picturesque countryside, this slow-burned film will appeal mainly to fans of the novel on which it's based and admirers of popular German actress Martina Gedeck, who's seldom off screen in a one-person tour de force. Elsewhere it's more festival fare than a distribution prospect, though there's possible English-language remake potential.

The idea of an area being invisibly, impenetrably sealed off predates Marlen Haushofer's 1962 book -- an action-light, allegorical tale that's for decades been a steadily popular best-seller in German-speaking countries. Rod Serling's 1960 Twilight Zone episode "The Monsters Are Due on Maple Street" has, in particular, proved enduringly influential, most recently on The Simpsons Movie and Stephen King's novel Under the Dome. In these forerunners it's an entire town that's affected, but here what develops is a nightmare of inexplicable, solitary confinement.

Gedeck's nameless, fortysomething "Woman" is out walking, when first her friends' dog Lynx and then she herself bump into the invisible barrier. Every living thing beyond the "wall" is eerily frozen, presumably dead, and the Woman soon feels like the last human on Earth. But she isn't alone, as the affected area includes a range of creatures -- the dog, a pregnant cow, a cat, and various deer which the Woman uses to supplement her (conveniently ample) provisions.

Narrated in flashback as the Woman writes up her experiences, the picture's cerebral sombreness signals we'd be foolish to expect any explanations or resolution. The only significant drama revolves around Lynx's unfortunate fate -- indeed, the bond between the Woman and this red-brown Bavarian Mountain Dog, endearingly played by the director's own pedigree hound "Luchs vom Kyffhäuserbach," is the emotional crux of proceedings.

Rather like a downbeat, arthouse cross between Robert Zemeckis' Cast Away and TV's The Simple Life, the Woman is forced to survive by toiling on the land and relying on her own resilience. Gedeck (The Lives of Others, The Baader-Meinhof Complex, Mostly Martha) makes for a flintily reserved presence -- seldom speaking aloud but providing copious narration about her activities and mental state.

Her chronicle often takes on an existentialist, analytical tone: "the only creature in the forest that can really do right or wrong is me." And there's plenty of time for the viewer to muse on what The Wall might or might not symbolize -- when events finally take an abruptly surprising and violent turn, the tonal shift is unsatisfyingly awkward.

It's also perhaps unfortunate that writer/director Julian Roman Pölsler -- best known for his TV work -- should depart from the novel by withholding all information about the Woman's previous life (in the book she's a widow) or rather, having her block out all such memories. If she's incarcerated in a kind of prison, it at least enjoys stunningly beautiful surroundings: breathtaking Cinemascope images from nine credited cinematographers are cut together by six editors to conjure the transcendentally gorgeous environment in which the Woman and her four-legged pal spend their days.