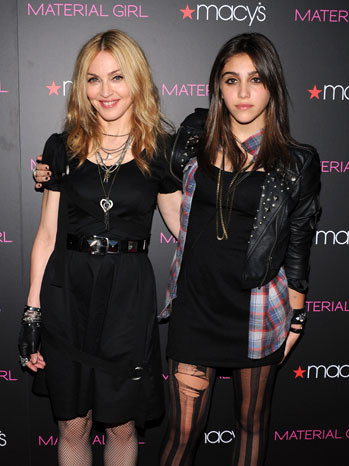 She also almost got her big-screen moment, but then she was cut from the film -- by her mother.

The film charts the love affair between Wallis Simpson and Britain's Prince Edward, who abdicated the throne in order to marry Simpson.

"I just kind of dragged her in at the last minute. It was quite unfair of me what I did and what I asked her to do," Madonna said.

However, Lourdes big-screen moment will never be seen by the public because the scene was cut from the film.

"But she was really great and then I ended up cutting her out of the film. Ruthless, I know," Madge teased. "I said, 'Sorry babe, you're on the cutting room floor.' She took it like a champ."

W.E. launched its awards season qualifying run Dec. 9, when the film was previously scheduled to debut in theaters. But the film's release date has been moved to Feb. 3. That means the film's release is now conveniently timed just two days before Madonna's highly anticipated performance at the Super Bowl halftime show on February 5.