'The Artist' Rules at the BAFTA Awards 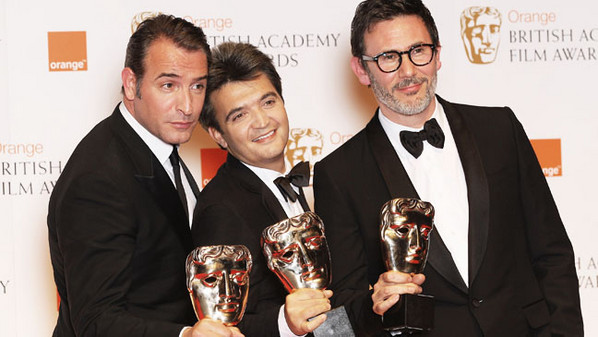 "The recognition of your peers is I think the most important thing," said director and writer Hazanavicius. "I am so happy and touched. I know I'll have some bad days because I am a director, but I will remember this day, today, as a good day, so thank you very much. Merci beaucoup."

Collecting the cinematography award, Hazanavicius got a cheer from the audience when he said: "Unfortunately, Guillaume (Schiffman) can't be here. But I guess if he were here, he would thank - me." Accepting the award for screenplay, he also drew a laugh. "I'm very surprised to win this award, because so many people thought there was no script because there was no dialogue, so English people are very clever, so congratulations to you."

Dislodging the silent movie in a rare category, Streep was so excited about winning the best actress award for her Margaret Thatcher biopic The Iron Lady that she lost a shoe in her hurry to reach the podium.

"That couldn't have gone worse," she said as award presenter Colin Firth retrieved her stiletto and stooped -- Walter Raleigh-style -- to place it back on her foot. But she recovered enough to pay tribute to the former British prime minister and revealed her little-known British roots.

"Half of me is Streep, but the other half of me is Wilkinson, from Lincolnshire, so I come by this award honestly," she said.

Christopher Lee, Robert De Niro and Max von Sydow paid tribute to Martin Scorsese, who was awarded a BAFTA fellowship for his service to film.

Veteran Christopher Plummer was a hugely popular winner in the best supporting actor category for his performance in Beginners, while Tinker Tailor Soldier Spy was named outstanding British film and winner of best adapted screenplay. Accepting the screenplay award, co-writer Peter Straughan dedicated the award to his late wife, the film's co-writer Bridget O'Connor, who died in October.

"My wife died before this film came out. She wrote all the good bits, I just made the coffee," he said. "Bridget, I love you, I miss you. This is for this is for you."

Octavia Spencer took the best supporting actress award for The Help, telling the BAFTA audience that she was grateful that the movie has been recognized by a British voting panel.

"It has been said the film is an American movie about American problems and American stories, so thank you for recognizing it, because surely oppression and strife knows no age, orientation or country."

The Orange Rising Star award - the only honor voted for by the public - went to Kidulthood and Adulthood star Adam Deacon, who is also writer, director and lead actor in British comedy Anuvahood. John Hurt was given the award for outstanding contribution to British film.

Paddy Considine and Diarmid Scrimshaw took the award for outstanding debut by a British writer, director or producer for Tyrannosaur, which beat competition from Ralph Fiennes' directorial debut in Coriolanus.

The award for film not in the English language went to Pedro and Agustin Almodovar for The Skin I Live In.

Best makeup and hair award went to team behind Streep's transformation in The Iron Lady.

Tom Jones opened the ceremony with a rendition of "Thunderball," taking attendees' minds off the freezing February cold.

It was left to Cuba Gooding Jr. -- presenting the visual effects award to Harry Potter and the Deathly Hallows Part 2 -- to pay tribute to the late Whitney Houston at the awards, looking up to the sky as he told the audience, "Whitney -- I will always love you."