Oscars 2012: Hans Zimmer and Pharrell Williams Pair Up as the Show's Secret Weapon

By FNN | February 25, 2012, 11:47pm IST
Summary: The unique music of this year's Academy Awards is due to the unlikely duo providing the soundtrack. 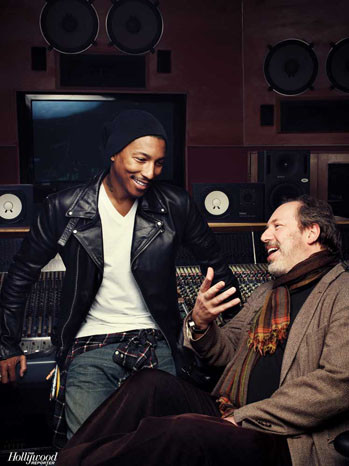 As presenter Tom Cruise saunters onstage at the Feb. 26 Academy Awards, viewers will notice a trippy drum-and-bass breakdown of the Mission: Impossible theme accompanying his entrance. The unique soundscape of this year's Oscars is due to the unlikely pairing of composer Hans Zimmer (Inception, Sherlock Holmes) and hip-hop producer Pharrell Williams (Jay-Z, Snoop Dogg) as music consultants for the telecast.

The two -- with help from music producer Peter Asher, formerly of 1960s folk duo Peter and Gordon and later a manager for James Taylor -- are promising to shake up the reputation of Oscar music as glorified Muzak. "I had an agent on the phone berating me, saying: 'You with your big ideas. You've got to acknowledge the tradition,' " says Zimmer, who won an Oscar for his score to 1994's The Lion King. "But the tradition of filmmaking, like the tradition of music, is innovation."

To that end, the duo has composed some 120 pieces for the show, supervising an orchestra of 60 with another dozen engineers, techs and assistants working late nights at Capitol Records' studios in Hollywood during the run-up to the big night. "When this began, we didn't even know what a bumper was," says Asher of the play-out to a commercial. Adds Zimmer: "Usually the music just repeats, but we're not off-the-rack, we're into custom tailoring -- couture. Of course, now we're paying the price."

Indeed, focusing on making the music more relevant to audiences - a task made more important by telecast producers' decision to jettison performances of the nominated original songs -- meant heading full-sail into uncharted waters. But Zimmer, 54, had confidence in his pop protege, Williams, 38, with whom he'd first worked on 2010's Despicable Me. "It needed to be something that was helping curate the emotion for the viewer," says Williams.

With handpicked players from around the globe and a few more recognizable faces from the music world (with a sur-prise being left for Oscar night), the pairing has yielded a thoroughly cool collaboration that melds the ritual (sweeping orchestral suites) with the now (heavy bass, syncopated synthetic drums), while still tipping its hat to filmmaking. "[Producer] Brian [Grazer] had come to us saying three things: 'Movies are bigger than life, they make you laugh, and they make you cry,'" says Zimmer. "We haven't cried yet, but we've had a few moments of having a bit of a giggle."

Photographed by Joe Pugliese on Feb. 19 at Capitol Studios in Hollywood