By FNN | May 5, 2012, 6:33pm IST
Summary: Gavin Smith, who has worked in Fox's distribution department for almost 18 years is missing since Tuesday Morning. 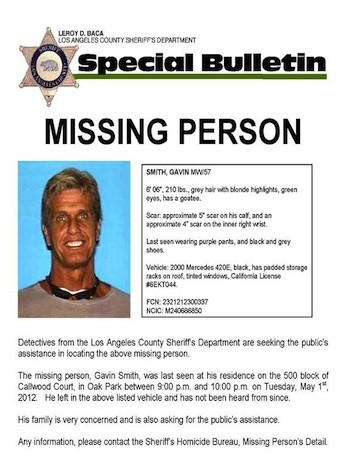 Gavin Smith, Los Angeles-based executive working at 20th Century Fox has been missing for several days, forcing the studio to enlist law enforcement in a search for his whereabouts.

Smith has worked in Fox's movie distribution department for almost 18 years, has not been seen since Tuesday Morning, according to a special bulletin distributed Friday by the Los Angeles County Sheriff's Department, which is seeking the public's help in locating him.

The executive, who works in Fox's Calabasas office and is the branch manager for theaters in Dallas and Oklahoma City, was last seen in his Mercedes 420E sedan on Tuesday evening near the Oak Park home he shares with his family.

"We are very concerned about Gavin," Fox distribution president Chris Aronson told Funrahi. "We are actively doing what we can to assist the L.A. Sheriff's department." Aronson says there were no indication in advance of any problems that might have led to Smith's disappearance.