Oscars 2012: Inside the Governors Ball

By FNN | February 27, 2012, 7:52pm IST
Summary: Jean Dujardin, Meryl Streep, Octavia Spencer and other winners revel while their statuettes are engraved and producers lament the wins that weren't. 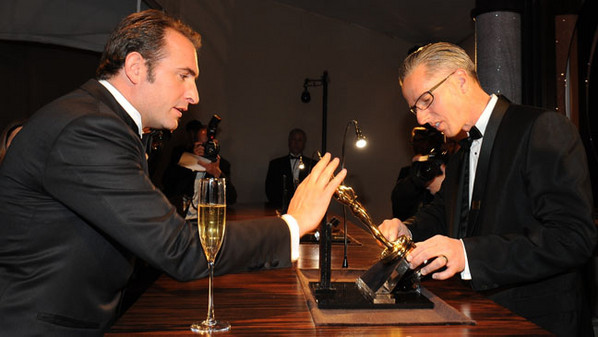 Sandra Bullock gave Meryl Streep a big hug. Jean Dujardin sipped champagne as his best actor Oscar was being engraved. And a mob of excited Frenchmen descended on the sushi bar as the Governors Ball welcomed the winners, losers and attendees of the 84th Annual Academy Awards.

Held in the decked-out banquet hall above the Hollywood & Highland theater and catered by Wolfgang Puck, the Governors Ball served as the official after party for the Oscars.

The Artist best director winner Michel Hazanavicius greeted the media throng outside, as best supporting actress Octavia Spencer embraced a line of well-wishers and other winners enjoyed drinks and the seemingly endless stream of food inside. Mini chicken pot pies, truffle mac and cheese and Oscar-shaped salmon appetizers were highlights.

Inside, the winners began to assess the night.

"It's very vindicating," said Hugo and Rango producer Graham King of the combined 6 wins for the two films. "It says a lot about the cast and filmmakers that we're working with. They all deserve it."

Fox Searchlight co-chief Steve Gilula said he was disappointed that George Clooney didn't win best actor but he was happy for the Descendants team, which walked away with the trophy for best adapted screenplay.

"It was a nice moment, and for Alexander [Payne] to have his mother here was especially great," Gilula said.

The Ball was packed with Hollywood's top execs, although talent seemed to appear briefly before heading off to other parties. Disney Studios' Rich Ross was seen discussing his upcoming release John Carter with filmmaker Brad Bird, who made Pixar's The Incredibles and Ratatouille before moving on to Mission Impossible: Ghost Protocol. Viacom chief Philippe Dauman was congratulating the crew behind Hugo, from his Paramount unit. And MPAA chief Chris Dodd was deep in conversation with Disney's Bob Iger.

Reaction to the show seemed positive. "It was fun," said Sony Classics co-chief Michael Barker. "I loved the Cirque, I loved the In Memoriam, I loved the way they handled the Governors awards," said Academy president Tom Sherak. "I thought the show just flowed."

Entertainment Tonight host Nancy O'Dell said her favorite moment of the night was talking to the parents of both Brad Pitt and Angelina Jolie on the red carpet. "Really great people," she said.

The overall mood seemed to be relief that the long awards season had come to an end. And winners were in especially high spirits.

"I haven't checked my phone but it was vibrating a lot after I won," said Rango director Gore Verbinski, an Oscar winner for best animated film "The whole thing was surreal. I'm shooting Lone Ranger right now, so I'm on a plane at 9:00 a.m. tomorrow."

Midnight in Paris producer Letty Aronson, who also is Woody Allen's sister, said she hadn't talked to the filmmaker but she was "pretty sure" he knew he won for best original screenplay.

"He was saying that the NBA All Star Game was on at the same time (as the Oscars) so he might have to turn the channel," Aronson said. "But I bet (wife) Soon Yi told him he won."