The Making of 'Chico & Rita': How a Low-Budget Animation Beat the Odds to Compete for Oscar 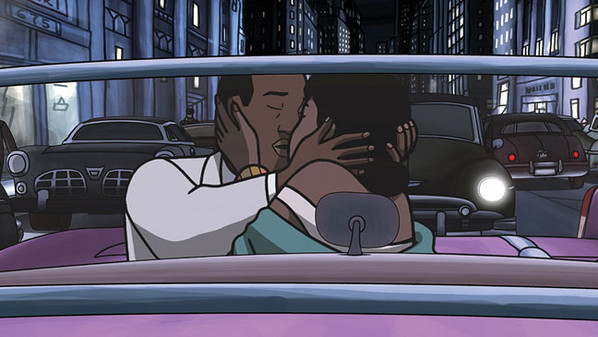 LONDON - If Chico & Rita wins the Oscar for best animated feature Sunday night, it will be a real long-shot victory - especially since the movie is up against big-budget features like Paramount's Rango and DreamWorks Animation's Puss in Boots and Kung Fu Panda 2.

But then Chico & Rita already has a long history of overcoming the odds.

Oscar-winning Spanish filmmaker Fernando Trueba - his Belle Epoque was named best foreign-language film in 1994 - and artist and designer Javier Mariscal, along with U.K.-based animation production label Magic Light Pictures, have been working on Chico & Rita, a love story set to the beat of Cuban jazz, since as far back as 2003. And back then few would have bet on its commercial viability - let along its eventual Oscar chances.

At the start, the biggest challenge facing the filmmakers was that the story they wanted to tell - that of a young piano player's fractious love affair with a jazz singer that takes them from Cuba to New York, Paris, Hollywood and Las Vegas - sounded too adult for an animated movie.

There were just no immediate precendents: Waltz With Bashir, set amid the 1982 invasion of Lebanon, and Persepolis, which followed a young Iranian girl's coming-of-age, were still in the future. And the fanciful French film The Triplets of Belleville was only just beginning to peddle its way to global success. Additionally, Mariscal had never made a movie, while Trueba had never directed an animated film. And so when they approached potential backers at the 2003 Cannes Film Festival, there were no immediate takers.

But Trueba tells Funrahi he never had any doubts that an animated feature was possible. "I was always talking to Javier [Mariscal] about making a movie and one day I saw his drawings of Havana, Cuba. And then I knew, that's what to do, write a love story about a singer and a piano player and work with him and his drawings," Trueba says. "We had the desire, passion and music to work together and that made it easy to spend so much time together on this to do it. We're still friends now."

The adult content they envisioned might have made it a tough sell, but "we never thought about it being live action, not for a second," Trueba continues. "It was always going to be an animation for us."

Magic Light Pictures, set up in 2002 by former Aardman Animations executive and producer Michael Rose and producer Martin Pope, also became convinced of the project's potential. And so, the new animation house created a promo and pitch while Trueba and Mariscal began assembling a top flight Spanish creative team.

One key player who was drafted early on was Spanish novelist, TV and film writer Ignacio Martinez de Pison, who began polishing the script. The filmmakers also brought in art department whizz Tonno Errando, who joined them as a co-director.

Further financial support came from the Isle of Man, where Steve Christian headed up the government-supported film financing and production group. Magic Lantern's Pope and Rose had produced two previous films on the Isle of Man, so they knew Christian well. And by the 2006 edition of Cannes, Christian and the Isle of Man's CinemaNX were on board, joining the tapestry of Spanish financiers and backers that had been assembled, and the project's budget of €10 million ($13 million) was within reach.

"We pitched the project to distributors and financiers and everyone who saw the script and the early teaser trailer loved it but everyone said it was very risky financially," Rose recounts. "So a lot of people told us to go and make it and then they'd talk."

Pope says Christian's belief and backing and the Spanish deals drummed up by Huete allowed the project to reach critical mass, financially.

It still took several more years for all the pieces to fall into place - the film sold to Walt Disney International in Spain, where it eventually grossed more $1 million during its theatrical release. And HanWay, the British sales and finance house, sold it elsewhere around the world.

The movie's actual physical production took more than two years, although Pope puts that into perspetive, explaining, "Clearly 2½ years for an animation is relatively quick."

Eventually, after the movie played the Toronto International Film Festival in 2010, it sold to the small U.S. distributor GKids, who entered it in the Oscar race.

Its nomination was greeted by both disbelief and joy by Rose and Pope, allowing them to make their second visit to the Oscars in just two year's time. Last year, their short film The Gruffalo was nominated in the best animated short film category.

"It's a wonderful reward for the last seven years," Rose says. "We commit ourselves [at Magic Light] to doing very few projects so we can try and make them of the highest quality and this feels like we are reaching the standards we aim for."