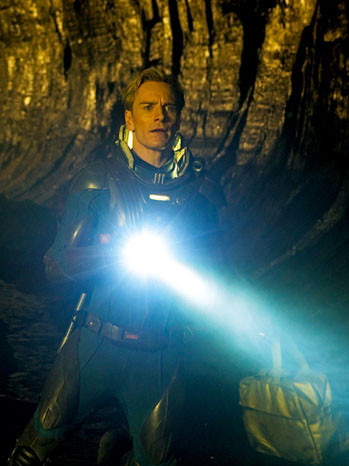 Twentieth Century Fox has released an international trailer for Prometheus, the studio's upcoming science-fiction opus directed by Ridley Scott. Running almost a minute and a half in length, the clip offers a few new glimpses of the pre-Alien world Scott created within the film, and promises an epic-scale adventure.

Prometheus marks Scott's return to the sci-fi genre after creating two of its seminal works, Alien and Blade Runner, and more specifically, the universe of the Alien series. Designed as a prequel to the other installments in the series, the film extrapolates an entirely new story out of the silhouette of the "space jockey" that was found dead at the beginning of Alien.

The clip highlights the ensemble cast, which includes Michael Fassbender, Charlize Theron, Idris Elba, Noomi Rapace, Patrick Wilson and Guy Pearce, as well as some of the spectacle audiences will see in the film. In addition to a wide shot revealing a broad landscape of explosions and fires, the characters find themselves thrown, struck and otherwise besieged by the elements while the explore the terrain of a planet that closely recalls the visual design and production detail of Alien.

Check out the clip below, which premiered at Daily Motion. Fox is releasing Prometheus nationwide on June 8.

Kick off your day with Funrahi's daily e-mail newsletter. It's the freshest entertainment news, gossip and box-office reports, served hot. Get it.
SAG, DGA and PGA Announce Dates for 2013 Award Ceremonies
'The Artist' Cesar Sweep Boosts Award Show Ratings On Canal Plus