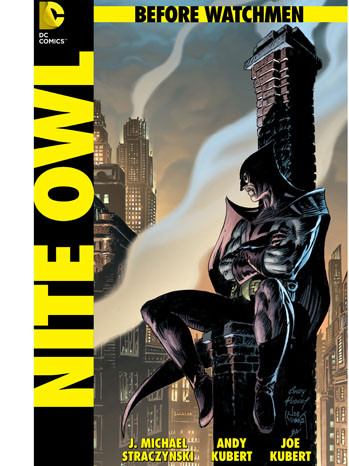 In what will surely be a controversial move, DC Entertainment is returning to the universe of Watchmen, the acclaimed 1986 graphic novel by writer Alan Moore and artist Dave Gibbons.

This summer, the company will publish seven prequel comic book mini-series called Before Watchmen, each week unleashing a new title focusing on the characters' lives and adventures in the years before the original story.

Watchmen is the top-selling graphic novel of all time and was part of a wave of comics in the 1980s that redefined the genre. The work has remained untouched, never integrated into the larger DC Comics universe, due partially to the reverence by fanboys and partially to Moore's insistence that it is a singular vision. (He also came out against the 2009 movie adaptation, Watchmen, directed by Zack Snyder.)

DC, which owns the characters, is now saying that enough time has passed that it's okay to explore new stories featuring the Watchmen.

"It's our responsibility as publishers to find new ways to keep all of our characters relevant," said DC Entertainment co-publishers Dan DiDio and Jim Lee in a statement. "After twenty five years, the Watchmen are classic characters whose time has come for new stories to be told.

The company has also enlisted the blessing of Gibbons, a move that should mollify many fans. "The original series of Watchmen is the complete story that Alan Moore and I wanted to tell. However, I appreciate DC's reasons for this initiative and the wish of the artists and writers involved to pay tribute to our work. May these new additions have the success they desire," he said in his statement.

Straczynski, known as the co-creator of the sci-fi show Babylon 5, as well as a writer of Superman and Spider-Man stories, will pen the four-issue Nite Owl series (which has art by Andy and Joe Kubert) as well as the four-issue Dr. Manhattan (art by Hughes). He spoke to Funrahi's Heat Vision to explain why the time is right for a return to the Watchmen universe, the writing process for the books, and his plans for Nite Owl.

Heat Vision: How did you become involved with Before Watchmen?

J. Michael Straczynski: The short answer is: I was asked. The long answer: Ever since Dan DiDio was handed the reins (along with Jim Lee) over at DC, he's been making bold, innovative moves that might have scared the hell out of anyone else. At a time in the industry when big events tend to be "Okay, we had Team A fight Team B last year, so this year we're gonna have Team B fight team C!" Dan has chosen to revitalize lines, reinvent worlds and come at Watchmen head-on. It was, I think, about two years ago that he first mentioned that he was considering the idea, and he's to be commended for fighting to make this happen.

HV: Was there any trepidation on your end to be part of this?

JMS: Anyone who sets foot into the Watchmen universe and isn't just a little nervous should be given a few days of electroshock therapy. I've always considered Watchmen to be one of the best graphic novels ever written, and when it came out back in 1986 I was as blown away as everyone else. Just masterful.

The thing is, though, writers are always being asked to play in amazing universes created by other people, and you can't let that scare you. If Darren Aronofsky can plan for a Noah's Ark movie, Steven Spielberg can consider tackling the story of Moses, and Mel Gibson can do another Bible movie, I think it's safe to say that the Watchmen universe is fair game, provided that you approach the work with clean hands and good intent.

HV: How do you think this will be judged and accepted considering 1) Alan Moore's stance against continuing the Watchmen universe, and 2) the sacred hold Watchmen has on readers?

JMS: The perception that these characters shouldn't be touched by anyone other than Alan is both absolutely understandable and deeply flawed. As good as these characters are - and they are very good indeed - one could make the argument, based on durability and recognition, that Superman is the greatest comics character ever created. But I don't hear Alan or anyone else suggesting that no one other than Shuster and Siegel should have been allowed to write Superman. Certainly Alan himself did this when he was brought on to write Swamp Thing, a seminal comics character created by Len Wein.

Leaving aside the fact that the Watchmen characters were variations on pre-existing characters created for the Charleton Comics universe, it should be pointed out that Alan has spent most of the last decade writing very good stories about characters created by other writers, including Alice (from Alice in Wonderland), Dorothy (from Wizard of Oz), Wendy (from Peter Pan), as well as Captain Nemo, the Invisible Man, Jeyll and Hyde, and Professor Moriarty (used in the successful League of Extraordinary Gentlemen). I think one loses a little of the moral high ground to say, "I can write characters created by Jules Verne, H.G. Wells, Robert Louis Stevenson, Arthur Conan Doyle and Frank Baum, but it's wrong for anyone else to write my characters."

The whole point of having great characters is the opportunity to explore them more deeply with time, re-interpreting them for each new age. That DC allowed these characters to sit on a shelf for over two decades as a show of respect is salutary, but there comes a time when good characters have to re-enter the world to teach us something about ourselves in the present.

HV: Why do a prequel and not a sequel?

JMS: Alan spends a lot of time in the original Watchmen teasing out details of the history of our characters before the time in which the graphic novel is set. In so doing, he gave us an excellent road map that would let us hew more truly to the characters than by telling a story that takes place after those events. The first time all of us got together in New York to solidify the storyline, we each had copies of Watchmen in hand and whenever a question was raised about what happened to whom and when, we'd flip through looking for the slightest clue. I joked at the time that it looked a lot like Saturday afternoon Bible Study.

HV: How did you end up writing Nite Owl and Dr. Manhattan? Did you have a say over which characters you would write?

JMS.: I wanted those characters because they are kind of bookends from a power standpoint. Despite his really cool gadgets, Nite Owl is in many ways the closest we have to a regular guy. He's not a near-nutbar like Rorschach, he's not the smartest guy in the world like Ozymandius, doesn't have the powers of Dr. Manhattan...he's the most normal guy in the bunch and that means he has to work really hard to get things done. By contrast, Dr. Manhattan has nearly godlike powers. So they're at opposite ends of the power spectrum, and that contrast appealed to me immensely.

HV: Did the writers work together to any degree?

J.M.S.: There was a summit and we've been emailing each other and using a website to upload ideas, scripts, outlines and ask each other questions. We worked out a ridiculously detailed timeline for all of the characters, and took great pains to not step on each other's toes. It's really like a hive-mind in that respect.

HV: Which Nite Owl are you focusing on? (Or both?)

JMS.: My focus is on the second Nite Owl, Dan Dreiberg, though the first Nite Owl shows up in the story, along with many of the other characters.

HV:What is the plot and setting?

JMS.: I wanted to show how Dan became the second Nite Owl, what circumstances led to him as a kid to reach out to the first Nite Owl with the goal of becoming a hero...the road that led him to that point, and where it took him as he assumed that role. I also wanted to show how his friendship with Rorschach began, how it worked while they were together, and why it ultimately fell apart...all of this set against a series of murders that they are drawn into.

HV: Are the prequels all connected?

JMS: There's some overlap here and there, but it's more thematic than plot-oriented. I think DC wanted to give each writer the room to really play with the characters he was given without worrying too much about tying it in with everyone else's story. At some point, the integrity of each of the miniseries would be compromised trying to do that. Instead, we were free to really follow the story of each hero cleanly. One of the things that has bugged me about recent comics publishing "events" is that the individual characters or titles are too often sacrificed to the vested interests of that event; here, DC turned the formula upside down and let the "event" serve the individual characters.

HV: And if this is successful, will there be a sequel to the prequel? And are there any plans to eventually integrate this universe with the broader DC Universe?

JMS: Both of those are questions for Dan DiDio. I'm just glad to have a chance to play with these characters right now. The future will attend to itself, it always does.