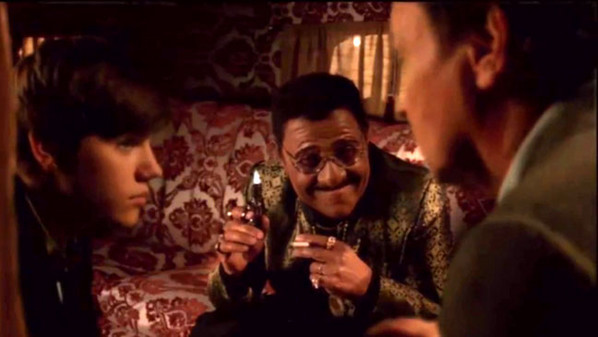 During Sunday's Academy Awards ceremony, Billy Crystal revisited one of his oldest bits as he put himself into the Best Picture nominees via some clever cutting, CGI, and occasionally, the assistance of the nominees' stars. But the Oscars host drew criticism after revisiting an even older bit in which he impersonates Sammy Davis Jr., prompting claims that his "blackface" performance was offensive and racist.

Following a segment in which Crystal spent a few seconds talking to Justin Bieber and Sammy Davis Jr. (actually Crystal in makeup) in a scene meant to reference Woody Allen's Midnight in Paris, complaints began pouring in from Twitter that Crystal, the segment and the show as a whole was racist for allowing Crystal to impersonate the iconic black performer.

Monday morning, online pundits offered critiques of his performance as Davis. Grantland contributor Andrew Ti, who runs the blog Yo, Is This Racist?, suggested that the bit was pointless at best, while Feministing said plainly, "Blackface is not okay. Ever." While the performance was obviously a throwback to Crystal's frequent segments as the singer on Saturday Night Live, many found the decision questionable at best since it had little or nothing to do with either the immediate context of that part of his intro or the Oscars in general.

On Twitter, comedian Paul Scheer lampooned the performance after African-American actress Octavia Spencer won an Oscar for Best Suppirting Actress in the racially-charged drama The Help: "Octavia Spencer's win shows just how far we've come since Billy Crystal performed in Blackface." Journalist and television personality Bevy Smith added criticism of a skit in which a fictional focus group offered feedback on The Wizard of Oz. After one of the characters requested Oz' flying monkeys be added to Gone With the Wind, Smith tweeted: "ok now they have one more time to make a racial joke,Gone With The Wind better have some monkeys in it,WTF! Blackface & monkey jokes 2 much!"

Crystal and the Academy of Motion Picture Arts and Sciences have not yet issued a statement or response to the controversy. But the polarizing reaction on Twitter and the blogosphere has already inspired discussions about where the line is, or should be drawn for white performers to imitate characters of different ethnicities. Is there a difference between comical impersonation and cartoonish derision, if it's a white performer playing a character of color? In today's climate is there a difference between "blackface" and a white person wearing makeup to look black for the purpose of comedy?

Leave your thoughts below in the comments section.

Kick off your day with Funrahi's daily e-mail newsletter. It's the freshest entertainment news, gossip and box-office reports, served hot. Get it.
Sacha Baron Cohen's Joke Leaves Ryan Seacrest in the Dust: What Hollywood Is Saying
More Daily News