By FNN | February 27, 2012, 8:14pm IST
Summary: UPDATED: “The Help” actress had been widely expected to take home the trophy after wins at the Golden Globes and SAG Awards. 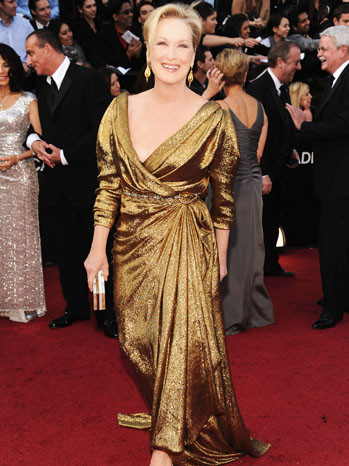 Meryl Streep winning an Oscar should hardly come as a shocker to anyone familiar with her lengthy career, but when Streep's name was called during Sunday's telecast, a collective gasp could be heard among audience members. The crowd quickly rose to give the iconic actress a standing ovation, with nominee Viola Davis among the first to stand and congratulate the winner.

Davis had been largely expected to take home the honor after beating Streep at the Critics Choice and SAG Awards this season. In fact, in Funrahi's Oscars Issue, Davis was chosen by awards analyst Scott Feinberg in the "Who Will Win" category, while film critic Todd McCarthy selected Streep as the contender who "should win." Though Davis' role of Aibileen Clark in The Help was widely regarded as one of the best performances of the year, the legendary Streep ultimately nabbed the gold statue for her portrayal of Margaret Thatcher in The Iron Lady.

While accepting her third Academy Award, Streep joked that "half of America" was likely groaning, "Oh, come on. Why her again?"

"But, whatever," she quickly quipped.

The actress drew laughs with her humble speech, thanking her husband Don Gummer early on and noting that she would "never be here again." Spotted in the audience was presenter Sandra Bullock, who won the best actress Academy Award in 2010 for The Blind Side, as she was moved to tears by Streep's words.

"I really want to thank all my colleagues, all my friends. I look out here and I see my life before my eyes," Streep said. "My old friends, my new friends. Really, this is such a great honor, but the thing that counts the most with me is the friendships and the love and the sheer joy we have shared making movies together. My friends, thank you all of you -- departed and here -- for this inexplicably wonderful career."

Streep holds a record 17 nominations spanning more than three decades, with her previous win coming in 1983 for Sophie's Choice.

The long-overdue kudos had Hollywood buzzing online, with Streep's name suddenly becoming a hotly searched term on Google and a trending topic on Twitter.

"I knew it! Meryl Streep! The Streak is over! Congrats on #3," wrote Ellen DeGeneres.

Streep's It's Complicated co-star Alec Baldwin said, "My congratulations and love to Meryl ... The Artist, Chris, Jean, Meryl, Octavia ... A pretty good year, I'd say. Congrats to The Academy." Later, he added: "You can't argue when Meryl Streep's name comes out of the envelope."

Kick off your day with Funrahi's daily e-mail newsletter. It's the freshest entertainment news, gossip and box-office reports, served hot. Get it.
Oscars 2012: Would Billy Wilder Have Voted for 'The Artist'? (Analysis)
Sacha Baron Cohen's Joke Leaves Ryan Seacrest in the Dust: What Hollywood Is Saying