Oscars 2012: Would Billy Wilder Have Voted for 'The Artist'? (Analysis) 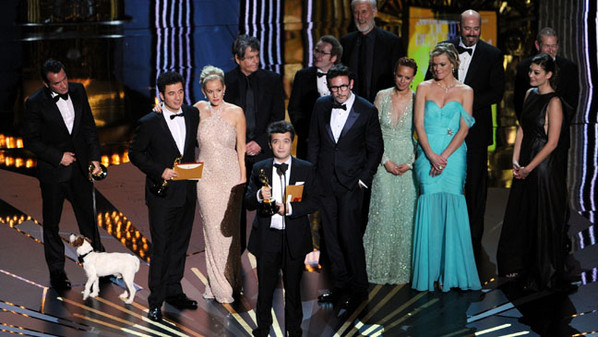 For a while, it looked as though things might not go the way the pundits predicted. Right off the bat, with two-time winner Robert Richardson pulling out a surprise cinematography victory, and then with Hugo continuing to roll up Oscars in numerous technical categories and, especially, The Girl With the Dragon Tattoo taking the editing award, the 84th Academy Awards pulled the rug out from under most prevailing expectations.

Harvey Weinstein's grip began to be felt when Undefeated won for best documentary but, up to the home stretch, with only the four major awards to go, The Artist had only won two, scarcely undeserved Oscars, for costumes and score. But then the fist came down and, once again, it was all Harvey time, with Meryl Streep winning, once again, for The Iron Lady, and The Artist taking director, actor and picture and Michel Hazanavicius thanking the late, multi-Oscar winner Billy Wilder three times, presumably for helping provide the inspiration for revisiting the days of silent cinema, even if Wilder himself never directed a silent film.

Would the mordant, caustic and verbally brilliant Wilder have voted for The Artist? It's impossible to say, of course, but his own view of another fictional casualty of talking pictures, Norma Desmond in Sunset Boulevard, was considerably darker than even the bleakest moments experienced by George Valentin's washed up silent movie hero. With perhaps one exception, Wilder never made anything as lightweight or ephemeral as The Artist.

Perhaps because there was no overwhelmingly great film this year or, alternatively, a huge popular favorite, Academy voters did the best they thought they could do by honoring The Artist. But I have little doubt that, even a year from now, people will look back and wonder, Why? It'll be the way people now puzzle about how Crash could have won, or Driving Miss Daisy, Rocky or Oliver! And, I'm afraid, there are those of us even now who are putting Jean Dujardin's Oscar win for best actor in the same bag with that of Roberto Begnini's in Life Is Beautiful. In other words: How the hell did that happen?

If The Artist has any dimension or topical relevance whatsoever beyond its novelty and charm, it's as a metaphor for the fear of technological advance; Valentin's refusal to change with the times can easily be interpreted as standing for the old guard's discomfort with the new ways of making cinema it doesn't understand, or doesn't want to. Seen through this particular lens, Martin Scorsese's Hugo, which also won five Oscars, would have been the more adventurous Oscar choice, simply because Scorsese, who, like it or not, is definitely part of the old guard now, paradoxically employed all manner of new (and expensive) technology in creating his infinitely more ambitious and complex exploration of the world of silent cinema. If only Marty had brought his film in at two hours or less.....

Like the film it celebrated, the Oscar show played it super-cautious, using all the most tiresomely familiar nostalgia-inducing clips and innocuous comments from various stars about why they love movies. I can't remember a show with so few social and political references. I can entirely live without self-righteous winners wind-bagging about their pet causes, but how about relevant jokes that at least let us know what year it is? It's election season; Bob Hope would have done a dozen jokes about the debates, even if he was a Republican. And was I seeing things or is Billy Crystal beginning to resemble the older Peter Lorre? Given that, led by The Artist, the Oscar winners were artistically conservative and dramatically safe, it would have been welcome had the show pulled the other way, with some edgier fare. It all had me wondering what the Oscar-watching party at Brett Ratner's house was like.