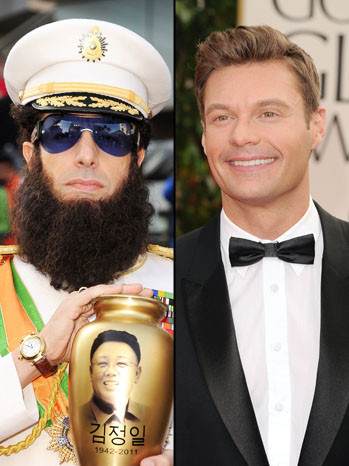 During the E! red carpet pre-Oscars show, Ryan Seacrest got "ashed" in his interview with Sacha Baron Cohen dressed as "The Dictator," the title character from his upcoming movie.

It may have been a joke to The Dictator, but Seacrest wasn't in on it. "My mom always told me to pack two jackets for red carpets, always wondered why. Now I know," he tweets.

Seacrest, who seemed to be in good spirits throughout the whole ordeal, later jokes with 30 Rock star Tina Fey, "I'm a little dusty." To which the comedian and actress responds, "You're a victim of comedy."

Several industry personalities weighed in on Twitter, as well. American Idol colleague Randy Jackson tweets, "Gotta holla at @RyanSeacrest about he and Sacha's weird ashes later at the party's."

Kelly Osbourne weighs in on her E! red carpet co-host's incident, "I'm sorry @RyanSeacrest this was the moment of the night!"

Yet, Piers Morgan disagrees with Baron Cohen's spill completely, tweeting: "This is just not funny. At all. Really."