By FNN | February 17, 2012, 7:59pm IST
Summary: The exiled prime minister of the Chechen Republic of Ichkeriya sends a letter to the actress asking that she disclose the whereabouts of the money she earned by appearing at a party for dictator Ramzan Kadyrov. 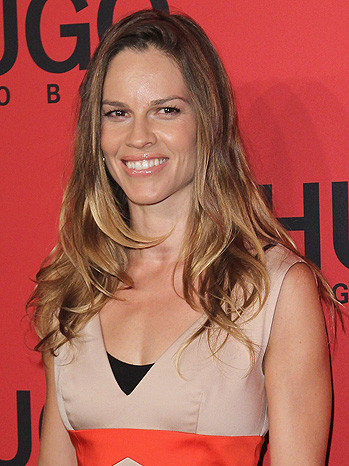 It has been more than two months since Hilary Swank told Jay Leno she was sorry for attending the lavish birthday of Chechen "bad guy" Ramzan Kadyrov. She announced on The Tonight Show that she had donated her fee for attending the event to charity.

Now the actress is being asked to disclose the recipient of her largesse. The request comes from Akhmed Zakayev, the man who was appointed prime minister of the Chechen Republic of Ichkeriya after President Aslan Maskhadov was murdered, allegedly by order of then-acting president of Russia Vladimir Putin.

In a letter dated Feb. 13 to Swank care of CAA agent John Campisi, Zakayev, who lives in exile in the U.K., cites some of Kadyrov's human rights violations and asks Swank to check the facts with actor-activists Angelina Jolie and Vanessa Redgrave.

Swank, as well as Jean-Claude Van Damme and other entertainers, attended Kadyrov's birthday bash in October and were roundly criticized for it. Swank fired some of her CAA team and her manager over the affair, and her publicists at 42 West dropped her because they felt she was blaming them for the debacle.

Video coverage of the 35th birthday party for Kadyrov from Euronews is below.

"I donated all the money," Swank said in December during an appearance on The Tonight Show With Jay Leno, where she also admitted she hadn't heard of Kadyrov prior to attending his party. (Video of the Leno appearance is below.)

"I would like to ask you to provide me with official information about the charitable organizations which have benefited from this money as a result of your public undertaking," Zakayev writes in his letter to Swank.

Also in the letter, a copy of which was obtained by Funrahi, Zakayev invites Swank to a March 17 conference in Copenhagen to discuss the fate of displaced Chechens.

"I can promise you," says Zakayev, "that instead of the painted facade which hides the suffering of the people terrorized by Russia and its henchmen this time you would be able to see real Chechnya and real Chechens."

Zakayev tells Swank that the "Soviet Union Russia unleashed two terrible wars on the Chechen soil" that resulted in the deaths of 250,000 people, including 40,000 children.

"The Russian regime of terror continues to reign in Chechnya under Kadyrov's leadership. He rules the country with fear and intimidation," Zakayev writes.

Swank never disclosed how much she was paid to attend Kadyrov's party, only that it was set up through a Turkish real estate company. On Thursday a spokeswoman declined to reveal the recipients of Swank's outreach or how much she has given, beyond saying that published reports suggesting her payment was as much as $500,000 are "inaccurate."

"Over the last four months, Hilary has been working directly and privately with various human rights organizations and other charities — giving both her time and financial resources," spokeswoman Michele Robertson said. "At the request of such organizations, and consistent with Hilary's longstanding practice of donating anonymously, she will not be publicly acknowledging her contributions and efforts."