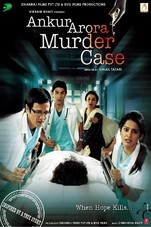 Rohan (Arjun Mathur) was a young medical intern who dared to dream. He was in awe of Dr. Asthana (Kay Kay Menon), the Chief of Surgery of the Shekhawat General Hospital. All he wanted to was be like him. He lived in with Riya, his co-intern and the love of his life. However, when an eight year old boy, Ankur dies due to Dr. Asthana's medical negligence, Rohan realises that a good surgeon is not necessarily a good person. Together with Ankur's mother Nandita, Rohan sets out on a turbulent journey to fight for what is right. A fight for justice against his mentor, the hospital and the love of his life.

“ Subject is not dealt with due degree of seriousness. ”

The film intends to be part hospital procedural, part courtroom drama, with a dash of chase-and-hunt thriller, all very Robin Cook-ish. The clash between an all-powerful doctor who has lost sight of his primary purpose of saving lives, and the intern who is willing to lose everything in the fight for justice should have made for cracking drama. But Ankur Arora Murder Case never really gets there, suffering from banal script-and story-telling, and amateurish acting.
Shubhra Gupta, Indian Express - June 14, 2013

Ankur Arora Murder Case is not an atrocious film, but is gravely disappointing. Wasting actors like Tisca Chopra and Kay Kay Menon along with making a spiced up version of true life incident of a death of a child due to medical negligence, the film is a sure damp squib for me.
Mohar Basu, Koimoi.com - June 14, 2013

ANKUR ARORA MURDER CASE illustrates and spotlights on the gaffes in the medical profession most persuasively. A heartfelt effort that deserves to be watched!
Taran Adarsh, Bollywood Hungama.com - June 14, 2013

Ankur Arora has an important point to make and a scary reality to represent. Often we equate doctors with god-like reverence, but occasionally they might mistakenly believe - given that they hold people's lives in their hands - that they are, indeed, god. This is a story of one such case. And it is a story worth listening to.
Karan Anshuman, Mumbai Mirror - June 14, 2013