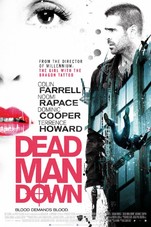 DEAD MAN DOWN is an action thriller that stars Colin Farrell and Noomi Rapace as two strangers whose mutual desire for revenge draws them together and triggers an escalating trail of mayhem. The film, which also stars Academy Award nominee Terrence Howard and Dominic Cooper, marks the American theatrical debut of director Niels Arden Oplev (the original The Girl With the Dragon Tattoo).

Watch All Videos of Dead Man Down

“ Dead Man Down has got the firepower! ”

Explores a common ground for noir thrillers before stumbling and imploding in a climax that feels like it might have been hijacked from an Arnold Schwarzenegger movie.
James Berardinelli, ReelViews - March 10, 2013

Yep, there's a whole lot going on here, but this is one of those plot-heavy scripts that carries its weight with confidence - the intricate twists don't cheat.
Rick Groen, Globe and Mail - March 8, 2013

News about Dead Man Down