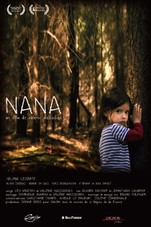 This spare, haunting, deceptively slight film - marking the feature debut of French filmmaker Valerie Massadian - zeroes in on the behavior and existential state of its 4-year-old protagonist. Growing up in rural France, Nana lives in a seemingly idyllic environment, but Massadian increasingly complicates our notion of the child's innocence. Opening with a matter-of-fact depiction of the butchering of a pig (Nana lives on her grandfather's pig farm), the film gradually tightens its focus to convey the child's perspective as she entertains herself in solitude. The subtlety and ingenuity with which Massadian reveals aspects of Nana's environment through the details of her playing is astounding, and only gradually do we come to realize the full, disturbing extent of her situation. Founded on the remarkable rapport between filmmaker and infant actress - "There's not one word, one gesture - nothing - that I imposed on her. We played", Massadian told Interview Magazine - NANA is a delicate, unsettling, and uniquely affecting film.