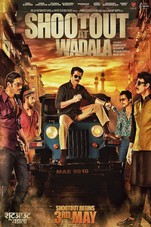 SHOOTOUT AT WADALA is the explosive true story of the war between Dawood, Manya Surve & Inspector Isaaque Bagwaan and the first encounter killing in Bombay. In 1982, Bombay witnessed an infamous encounter in Lokhandwala. The news was telecast by the BBC and covered extensively by the media across the country and internationally. Till date more than 820 encounters have been recorded in the files of Mumbai police, but where did it all begin? Who started it? When, where and how did it happen? SHOOTOUT AT WADALA is the answer to all these questions - the unbelievable true story of the first ever encounter in Bombay. An epic story, with overwhelming machismo. It outlines the rampant gang wars in Bombay and culminates in an explosive 3-way face-off between the dreaded gangster Dawood, the notorious & charismatic gangster Manya Surve & Inspector Isaaque Bagwaan. Based on S. Hissain Zaidi's book "Dongri to Dubai - Six Decades of The Mumbai Mafia".

View All Photos of Shootout At Wadala

Watch All Videos of Shootout At Wadala

“ Enough Bang for your Buck! ”

Shootout at Wadala captures the grit and grime of the mean streets to perfection. The film is generally entertaining without attaining the sort of innate quality that could attract favourable comparisons with Ram Gopal Varma's Satya and Company or Vidhu Vinod Chopra's Parinda.
Saibal Chatterjee, NDTV - May 3, 2013

Shootout At Wadala is an ingeniously made entertainer. Sanjay Gupta creates a well balanced venture which is beseeching for its crime thriller premise. John Abraham captivates in his charismatic role brimming with vicious grandeur. This one is a must watch adrenalin incurring, electrifying and at places a spine chilling action film.
Mohar Basu, Koimoi.com - May 3, 2013

Go watch 'Shootout At Wadala' at a single screen theatre this weekend… you won't be disappointed. Three stars for the film and an extra half for Zaveri's dialogues from me for Manya Surve's unforgettable resurrection!
Ananya Bhattacharya, Zee News - May 3, 2013

SAW ultimately belongs to Gupta, who stays true to the genre and makes a welcome return to the credible lot of Bollywood directors. Note: You may not like this film if don't have the appetite for blood and gore.
Meena Iyer, Times of India - May 3, 2013

News about Shootout At Wadala