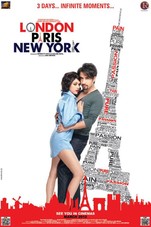 London Paris New York is a film that captures the angst of the twenties, the most dramatic period of one's life - when you have to find a career, you have your first significant relationship and most importantly form your identity in this world. This is story about Lalitha, a middle class south Indian girl from Chembur (an eastern suburb in Mumbai) who is on her way to New York to study politics with full scholarship, and Nikhil, a Punjabi, rich kid from Bandra (a posh western suburb of Mumbai) who is going to study Film Making in London on 100% dad's money. They decide to hangout together one evening in London and find that they are completely drawn to each other even as their future lies on separate continents. The film follows their personal journey and their love story as they meet in London, Paris and New York for a night each over eight years. The film is in three chapters and each chapter is shot in a manner that mirrors the mental state of Nikhil and Lalitha.

LONDON PARIS NEW YORK is a chic rom-com that's filmed in three hot-n-happening cities of the world.. What also sets this film apart is the fact that the story unfurls in eight years in three of the world's most thrilling cities, with the viewer getting a foretaste of everything that's allied with a rom-com in this globe-hopping voyage.The film follows their special voyage and their love story as they meet in London, Paris and New York over eight years. The film is in three subdivisions and each chapter is shot in a manner that mirrors the psychological state of Nikhil and Lalitha. On the whole, LONDON PARIS NEW YORK is akin to a lungful of fresh air amidst the hackneyed and passe rom-coms. It's a quirky, witty, coming-of-age movie that takes a conventional premise and twirls it into something delightfully unconventional, designed to charm and magnetize the urban youth. The movie speaks their lingo, mirrors their objectives and depicts the anguish and elation of falling in love. If you are young or young at heart, celebrate your weekend by leaping on to this feel-good earth hopping romance.
Taran Adarsh, Bollywood Hungama.com - March 2, 2012

London Paris New York is a sweet story that deals with very real emotions. It is urbane, cool and thankfully, not dated. The simplicity of the dialogues makes it enjoyable. It deals with the trials and tribulations of the youth, and the complexities of finding real love. It probably won't move you to tears, but one thing is for sure -- after traveling across the globe, this one won't leave you jet-lagged.
Avijit Ghosh, Times Of India - March 2, 2012

What's Bad: The very restricted appeal of the script; elements of the screenplay which are not convincing; the lack of hit music.

Verdict: London Paris New York will not work too well in India.

Watch or Not?: Watch it for a different movie experience.
Komal Nahta, Koimoi.com - March 2, 2012

Beginning on a light-hearted note, the director is unable to sustain the mood. When the characters are in a state of turmoil the dialogues lose their conversational feel. It's here the film starts running out of steam. The director uses melodrama to depict anxiety and stress.The film has its moments though. Aditi speaks her mind, barfs all over her lover boy in a drunken haze and doesn't set out to make herself alluring or enticing. But then there are also some major gaffes in the screenplay.The clichéd climax doesn't bring any sense of relief either.The film undoubtedly belongs to cinematographer and for that alone give this film a chance
Preeti Arora, Rediff.com - March 2, 2012