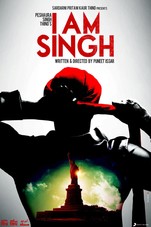 The story is about a young Sikh named Ranveer Singh. Ranveer is a young, confident, intelligent and a very well settled man in India. Ranveer's elder brothers Balbir Singh and Bikram Singh are citizens of America. They are doing very well for themselves. They run restaurant business in the USA. Ranveer's parents leave for holiday to the US to meet their son. Ranveer doesn't want to join them as he is busy attending his friend's wedding in India. Life is easy going for this family. The story takes a turn when Ranveer receives a call from his mother. Ranveer's life changes in a flash as he comes to know that his brother Bikram is dead. His father is seriously injured and his elder brother Balbir is missing. The cause of this is unknown. Ranveer is in a dilemma and he has to leave for the US. Ranveer leaves for the US and on the way different thoughts get into his mind about the happening. He doesn't know what is in store for him in the US. Ranveer reaches the US and tries to find out what actually happened to his family. He doesn't get the right answers. Furthermore he is shocked and confused with the situation, but something in him, keeps telling him that there is something to the whole incident, what seems on the face is not the fact. The fact remains a mystery to him. Ranveer meets Rizwan Haider, a Pakistani, who is an American Citizen. Rizwan tells him what actually had happened on that day. Some local miscreants had attacked Ranveer's family and has absconded. These people were locals and had the support of the local police and people. Ranveer meets the local Police in Chief, who doesn't want to help him in any ways. Ranveer realizes that he has to fight this battle on his own. As luck would have it, he meets another local citizen, who happens to be a Sikh named Fateh Singh - a police office in the LAPD. Fateh Singh introduces him to a lady, who is Human Right Activist, Yoga Exponent and a very famous Attorney, Amelia Whites. Amelia Whites is a beautiful American, who believes in equality and justice in the true American spirit. Amelia promises Ranveer to take his fight up to the authorities and get him justice at all costs. Amelia fights her way through the local American System with the help of Ranveer, Rizwan and Fateh Singh. In this process, Amelia and Ranveer develop a bonding which is more than friendship. Here they realize that the attack on Ranveer's family was by the local hoodlums, who were hand in glove with the local police chief. Amelia fights tooth and nail to prove that every person in America is equal and should be treated equally. Ranveer and Amelia's fight becomes stronger when they meet FBI Agent Sean Meyers, he too like Amelia believes in the spirit of equality. Sean Meyers not only joins the fight, but also makes it into a crusade, which is taken notice not only joins the fight, but also makes it into a crusade, which is taken notice not only by the authorities, but by also the American citizens who want the culprits to be brought to the books. The attack on Ranveer's family gets nationwide media coverage. The culprit run for cover, but Ranveer, Rizwan, Fateh Singh and Sean Meyers with the help of the LAPD apprehend and culprits, who were on the run and were trying to cross the border. Ranveer is reunited with his family and is indebted to Amelia Whites and Sean Meyers, who is the true spirits of America led from the front and got Ranveer justice. Ranveer, in this process, lost his young brother Bikram, but made new relations with Rizwan Haider, Fateh Singh, Sean Meyers and last but not the least Amelia Whites. The story deals with the bonding of different cast and cultures in the USA, the only country in the world, which is so multi-dimensional. Yet everybody is free to follow their religion and cultures and to be treated equal. America has always led by example and taught the whole world what equality is.

I Am Singh Photos

View All Photos of I Am Singh

I Am Singh Videos

Watch All Videos of I Am Singh

News about I Am Singh

Read More News about I Am Singh

View Full Box Office Analysis & Reports for I Am Singh