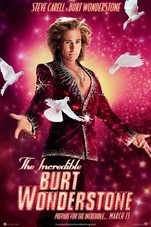 Superstar magicians Burt Wonderstone (Steve Carell) and Anton Marvelton (Steve Buscemi) have ruled the Las Vegas strip for years, raking in millions with illusions as big as Burtâs growing ego. But lately the duoâs greatest deception is their public friendship, while secretly theyâve grown to loathe each other. Facing cutthroat competition from guerilla street magician Steve Gray (Jim Carrey), whose cult followingsurges with each outrageous stunt, even their show looks stale. But thereâs still a chance Burt and Anton can save the actâboth onstage and offâif Burt can get back in touch with what made him love magic in the first place.

This comedy about a magician who must hit bottom before rising again to the wonder of his beloved craft pulls plenty of sweet moments and a slew of laughs out of a story that might have been thin air.
Lisa Kennedy, Denver Post - March 15, 2013

A generic, fitfully funny mainstream comedy that doesn't nearly get the best from its name-brand players but doesn't qualify as a desecration, either.
Ann Hornaday, Washington Post - March 15, 2013

A veritable festival of bad toupees and repeated gags that just lie there, "The Incredible Burt Wonderstone'' runs a bit more than an hour and a half but seems much longer - like it had been edited down at the last minute.
Lou Lumenick, New York Post - March 15, 2013

News about The Incredible Burt Wonderstone