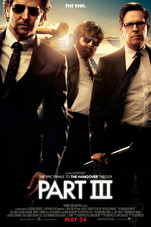 "The Hangover Part III" is the third and final film in director Todd Phillips' record-shattering comedy franchise. This time, there's no wedding. No bachelor party. What could go wrong, right? But when the Wolfpack hits the road, all bets are off.

View All Photos of The Hangover Part III

Watch All Videos of The Hangover Part III

This third installment could easily be dismissed as too little, too late, if only it weren't in fact too much, too late.
James Rocchi, MSN Movies - May 24, 2013

This odious, mean-spirited movie appropriates the title and the characters from the previous pictures and sends them on a would-be adventure involving gangsters, gold bars and that pinnacle of hilarity, decapitated giraffes.
Rene Rodriguez, Miami Herald - May 24, 2013

Coupled with its logic headaches, it left me feeling like I needed an Alka-Seltzer Plus. Anything to add a little fizzy relief to these flat and unfunny proceedings.
Michael O'Sullivan, Washington Post - May 24, 2013

News about The Hangover Part III