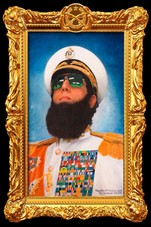 The heroic story of a dictator who risks his life to ensure that democracy would never come to the country he so lovingly oppressed.

“ Funny, Obscene, Disgusting, Vulgar, Crude and So On. ”

Cohen at his best is both brazen and sly. As is The Dictator.
Michael Phillips, Chicago Tribune - May 16, 2012

Of course it's offensive and tasteless. That's the point. Sometimes the jokes are excruciatingly funny.
Richard Roeper, Richard Roeper.com - May 16, 2012

The Dictator is funny, in addition to being obscene, disgusting, scatological, vulgar, crude and so on.
Roger Ebert, Chicago Sun-Times - May 16, 2012

While Baron Cohen's lanky physical slapstick and verbal manglings are funny, the movie begins to feel like one of the later, worn-out Pink Panther movies.
Liam Lacey, Globe and Mail - May 16, 2012

Read More Reviews for The Dictator

News about The Dictator