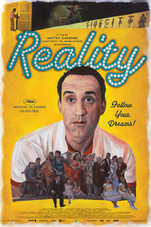 From acclaimed director Matteo Garrone, REALITY is a darkly comic look at Luciano, a charming and affable fishmonger whose unexpected and sudden obsession with being a contestant on the reality show âBig Brotherâ leads him down a rabbit hole of skewed perceptions and paranoia. So overcome by his dream of being on reality TV, Lucianoâs own reality begins to spiral out of control, making for one of the most compelling tragicomic character studies since Scorseseâs "The King of Comedy."

Watch All Videos of Reality