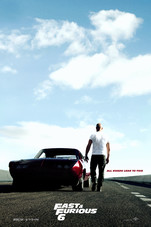 Vin Diesel, Paul Walker and Dwayne Johnson lead the returning cast of all-stars as the global blockbuster franchise built on speed races to its next continent in Fast & Furious 6. Reuniting for their most high-stakes adventure yet, fan favorites Jordana Brewster, Michelle Rodriguez, Tyrese Gibson, Sung Kang, Gal Gadot, Chris Ludacris Bridges and Elsa Pataky are joined by badass series newcomers Luke Evans and Gina Carano. Building on the worldwide blockbuster success of Fast Five and taking the action, stunts and narrative to even greater heights, Fast & Furious 6 sees director Justin Lin back behind the camera for the fourth time. He is supported by longtime producers Neal H. Moritz and Vin Diesel, who welcome producer Clayton Townsend back to the series.

View All Photos of Fast & Furious 6

Watch All Videos of Fast & Furious 6

Exists purely to showcase how idiotically over-the-top action sequences can become when annoyances like gravity are tossed to the side.
James Berardinelli, ReelViews - May 24, 2013

Some of the action sequences are insane. No, really. Absurd, impossible, physics defying, triage-required stuff. No matter. That's the foolish rush of a franchise that must go faster and faster and furiouser and furiouser.
Lisa Kennedy, Denver Post - May 24, 2013

Furious Six continues on in the same vein as its predecessor, and may just be my favorite of the lot.
Ian Buckwalter, The Atlantic - May 24, 2013

For their own part, Vin Diesel and the "F&F" handlers seem eager to assert how they've molded a series of installments into, yep, a saga, complete with expansive, twisty continuity.
Tom Russo, Boston Globe - May 24, 2013