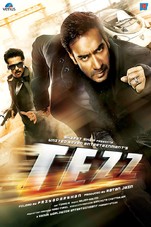 One man is out to get back what was unjustly taken away from him... the other is willing to do whatever it takes to stop him in order to serve justice; both are pitted against each other...and both are pitted against time. Lives have already been destroyed and more lives are about to be devastated as a train speeding from Glasgow to London holds the fate of Aakash Rana (Ajay Devgn) and Counter Terrorism Command Arjun Khanna (Anil Kapoor), and only one of them will succeed. Stylishly shot across England with action sequences like none other, Tezz also features Kangna Ranaut, Boman Irani, Zayed Khan, Sameera Reddy and Mohanlal. The action has been directed by Gareth Milne and Peter Pedrero who have been involved in the stunts for films like Harry Potter and the Deathly Hollows, Quantum of Solace and The Bourne Identity while the music has been scored by the hit duo Sajid-Wajid.

Watch All Videos of Tezz

Riveting action movies are a rarity in Bollywood. Action movies that stand out come along once every few years. TEZZ, helmed by Priyadarshan, is one of them.The story of TEZZ is uncomplicated.TEZZ is a good looking thriller filmed with expertise. Loaded with an ingenious premise, thrilling moments and action, Priyadarshan has curved it into a tremendously well-executed motion picture. The film's sole objective is to keep moving at a feverish pace, keeping the spectator completely immersed and entertained with the on-screen occurrences. Sure, there are some unwarranted moments , but the pacing is so breakneck and the cinematography so superior that it's easy to overlook the few unreasonable moments. On the whole, TEZZ is a taut, entertaining action spectacle. Those with an appetite for well-made thrillers should lap it up!
Taran Adarsh, Bollywood Hungama.com - April 27, 2012

Anil Kapoor and Ajay Devgn may be sharp but with a blunt script and a blot for a plot, their performances couldn't save this highly explosive turkey from detonating. For a film that struggles and strives to look like a western product, its VFX is embarrassingly poor. When a film spends 40 crores to establish extremely high production values, it needs to be backed with a script that deserves it. The cinematography isn't particularly ingenious and the background score by Sandeep Chowta does little to lift the mood.
Kunal Guha, Yahoo - April 27, 2012

The extent of his involvement on Tezz for one, hardly qualifies as anything more than mere 'filming', given that it's an unapologetic rip-off of the popular Japanese film, The Bullet Train. From leather jackets and trench coats to dark glasses and monkey caps…if only half the budget spent on the trendy wardrobe of the actors in this film had been utilized to hammer out a more sensible script, perhaps Tezz might have been a less stupid film. Tezz has many of the ingredients for an engaging, fast-paced thriller. What it needed was a director to assemble its parts and make them work. Alas, Priyadarshan is content with merely filming.I'm going with one-and-a-half out of five for Tezz…awfully boring for a film that promises speed and thrills.
Rajeev Masand, CNN IBN - April 27, 2012

In truth, the film is full of Hollywood-style car chases amidst a long-running game of cat and mouse between Anil Kapoor and Ajay Devgn. Tezz is fast and lives up to its title, but it is also its title that gives away its source -- Jan de Bont's 1994 thriller Speed. That was an excellent film and though Tezz may not be as good as that, it doesn't make too many demands on your time. And that's not such a bad thing at all.
Shaikh Ayaz, Rediff.com - April 27, 2012