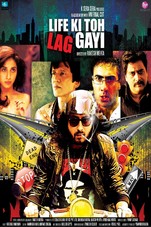 Life Ki Toh Lag Gayi is a one day journey of four different people struggling in the city of Mumbai. One with vengeance, one on a mission, one with hope and one to con. They eventually ends up at one place and finds their ways... Tensed Salman (Kay Kay Menon) is looking for the murderers of his parents, a humiliated cop ACP Chautala (Manu Rishi Chadha) is looking for 4 Nigerian drug peddlers with 24 hours dead line on his neck, a desperate lover Amol Ganguly (Ranvir Shorey) comes to rescue his beloved girl friend who got married to some millionaire, a runaway girl from Chandigarh Dolly (Neha Bhasin) wants to go back to home but not before she recovers all the money she has lost in attempt to become the top heroin of Bollywood and then a surprise Ajoy Ghosh the funny Bengali anti Christ rockstar who advises his close friend Amol Ganguly to commit a suicide and it all happens in one day in city of Mumbai....

For eons, Mumbai has spurred creativity in filmmakers. Some good, some bad. Some grossly confused. Like this one. Director Rakesh Mehta tells a story which is more cramped with characters than Mumbai's local trains. The dialogues are unmoving and script more disoriented than the city's unbearable traffic. While trying to create a montage of a struggling day in the life of Mumbai, the real story is stuck in some galli of Crawford Market. Watch it at your own risk, but remember, we warned you. Given a choice, we'd like the real city and a drive on Mumbai's roads - it probably has fewer potholes than this story.
TNN, Times Of India - April 27, 2012

Screenplay writer doesn't waste time to establish the plot thus, 'Life Ki Toh Lag Gayi' begins on a promising note. But, as the story flows, a certain uncomfortable numbness seeps in due to the stagnant plot, which finally ends with a very loosely knitted climax. Barring few performances and dialogues, nothing in the film manages to strike the chord. Poor script, boring screenplay and music leaves 'Life Ki Toh Lag Gayi' in a very risky situation. On the whole, Life Ki Toh Lag Gayi leaves one uncomfortably numb; so, enter the halls at your own risk.
Daily Bhaskar, Dainik Bhaskar - April 27, 2012