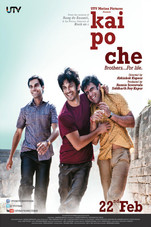 Best friends Ishaan, Omi and Govind - young, ambitious and restless - are trying to make a mark in the India of the early 2000's. These are exciting times - a new millennium has just dawned, India's a nuclear power and ostensibly shining - a perfect time for the 3 Ahmedabad boys to start a business that could be their ticket to fame and riches. In a country where cricket is religion, they hit upon a brilliant plan - to start a training academy that could produce India's next sporting superstars! What follows is without doubt the greatest adventure of their lives, as they attempt to navigate the big hurdles in the path of fulfilling their dreams. Each has a different motive: Govind's goal is to make money; Ishaan desires to nurture Ali, a gifted batsman; Omi just wants to be with his friends. The events that transpire against the backdrop of all that occurred in the city during that time, change the lives of each of the friends in very different ways. Govind is the narrator and the central character of the novel, and the story revolves around the three mistakes caused by him and the religious politics. This movie is being directed by Abhishek Kapoor, Director of Hit Movie 'Rock On'. Kai Po Che is a film based on Chetan Bhagat's best-selling novel '3 Mistakes of My Life'. The novel, based on real events, is set in the years 2000-2005.