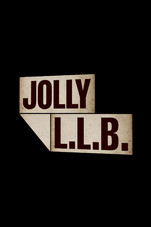 A social satire on the law system of the country, where a small town lawyer Jolly (Arshad Warsi) is pitted against a hugely successful lawyer, played by Boman Irani.

Watch All Videos of Jolly L.L.B.

Jolly LLB is a feel-good satire in the best sense of the term. Despite the uneven writing, Jolly LLB works because it has heart. Make time for it this weekend.
Anupama Chopra, Hindustan Times - March 15, 2013

Its heart unquestionably in the right place, 'Jolly LLB' is very watchable, even if it does paint in broad strokes. Not a bad way to spend an evening.
Rajeev Masand, CNN IBN - March 15, 2013

Jolly LLB is funny in parts but preachiness and the need to flaunt the film’s sincerity and heart get in the way.
Raja Sen, Rediff.com - March 15, 2013

Film is stodgy and predictable. Warsi never really lifts off the screen despite his playing the poor-but-ultimately-good-man to the hilt (with the exception of a speech or two). Neither does Irani, even though he looks the part. Rao, who plays Warsi's love-interest, is superfluous to the proceedings. The only one who lifts the film and makes it worth our while is Shukla, who has got himself a role worthy of his talent after a long time.
Shubhra Gupta, Indian Express - March 15, 2013