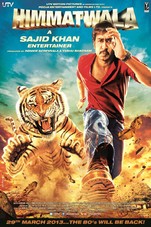 The biggest remake of the 80s Bollywood cult classic 'Himmatwala' is a story a poor and wronged woman's son returns from the big city to avenge his father, a honest school teacher.

Watch All Videos of Himmatwala

“ Why was Himmatwala even remade? ”

HIMMATWALA takes you back to the familiar terrain. It's the typical good versus bad saga loaded with every possible ingredient that makes masala films tick. Sajid ensures that those who have watched the earlier HIMMATWALA -- or those who haven't watched it -- get paisa vasool entertainment in those 2.30 hours, but, unfortunately, what unfolds on screen is so routine and monotonous that you fervently hope for some novelty in this adaptation. One doesn't mind massy entertainers, but there has to be a hook to keep the viewer's attention arrested. On the whole, HIMMATWALA fails as a film. The only silver lining is the presence of A-list stars and of course, the hype surrounding the film, which might attract footfalls in mass-friendly circuits initially. But as a film that promises big entertainment, HIMMATWALA is hugely disappointing!
Taran Adarsh, Bollywood Hungama.com - March 29, 2013

Sajid Khan’s “entertainer” ‘Himmatwala’ starring Ajay Devgn has all the ingredients of a mindless masala film. But it does jolt you at regular intervals, for sopping up a 30-year-old formula, proves fatal to your contemporary digestive system! In totality, the film is a typical masala entertainer, as director Sajid Khan would like to put it. You will certainly get entertained only if you had nursed the desire to travel back in time, especially to an era when cinema revolved around a helpless mother-daughter duo and their life-savior ‘Himmatwala’. One and half for the film and half a star more for Paresh Rawal.
Gayatri Sankar, Zee News - March 29, 2013

You'll laugh at Sajid Khan's remake of Himmatwala if not with it. The new Himmatwala displays this quality but only in spurts and superficially. Sajid Khan loves big scale but the production values of all his films, their aesthetics, g are consistently tacky. Himmatwala is no different. In one of the films' hilariously tragic scenes, a character says, 'Teri maa, meri maa. Teri bahen, meri bahen.' But even though I sincerely tried Sajid, 'teri audience cannot be meri audience.'
Sukanya Verma, Rediff.com - March 29, 2013

Himmatwala is painfully overlong, insufferably silly and utterly devoid of any genuine touches of inspiration. It is a mindless potpourri that brings together the worst ingredients of 1980s Hindi cinema and parlays them into a messy mélange that quivers repeatedly under its own weight. Sajid Khan not only believes in the ‘anything goes’ philosophy that drives a segment of the Mumbai movie industry, he also dares to go out on a limb to try and pull it off in practice.
Saibal Chatterjee, NDTV - March 29, 2013