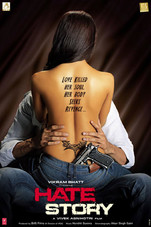 Watch All Videos of Hate Story

Hate story revolves around Kaavya [Paoli Dam] and her transformation from a simple middle class journalist to a sex worker to seek revenge. Kaavya, who doesn't have anything to lose anymore, uses her sexuality as a lethal weapon to rip Siddharth [Gulshan Devaiah] apart by using everyone connected to him one way or another.Movies with such an audacious theme generally ignite debates and HATE STORY is sure to meet with severe reactions. The makers ought to be prepared for some bouquets and brickbats. What makes the movie watchable is the vengeance aspectOn the whole, HATE STORY banks on the age-old vendetta theme, but what takes it beyond the mediocre mark is the cat and mouse game played by the protagonist and antagonist, besides, of course, the bold and provocative scenes that add spice to the proceedings. Though engaging in parts, there's no denying that the second hour seizes your attention, making it a watchable experience.
Taran Adarsh, Bollywood Hungama.com - April 20, 2012

There is no novelty in the story. It is the usual vendetta saga. While the premise for revenge is promising, the method is a little baffling.Why would Kaavya want the services of the most expensive 'call girl' to understand the art of faking? Or, why would she want to be a prostitute to get at Siddharth. Vivek Agnihotri gets off the track here by trying to infuse some oomph. But he has done enough of that in the seduction scene between Siddharth and Kaavya! In short, Kaavya need not have indulged in prostitution to get even. That is a big letdown.HATE STORY is neither spectacular, nor boring. It falls somewhere in between.
Martin D Souza, Glamsham.com - April 20, 2012