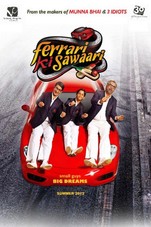 A little boy thinks of nothing but cricket. His father, Rusy, thinks of nothing but his little boy. To fulfill his son's dream of playing at Lord's cricket ground, the honest and upright Rusy performs the first small act of dishonesty in his life. He borrows a gleaming red Ferrari. Just for one hour. The only trouble- he doesn't inform its legendary owner. A wild, breathless, bumpy ride begins. A ride that leads to a menagerie of amazing characters: a wedding planner who'll stop at nothing, a Laurel-and-Hardyesque pair of loyal attendants, a greedy politician and his reckless son, a mechanic who specializes in stolen cars... As the Ferrari zooms through this chaotic world of street-thugs and mass-weddings, another saga unfolds-a grumpy old man and his secret wounds, and an epic rivalry that goes back fifty years. A naive Rusy must dodge bullets and bouncers for one unforgettable night, and play the role of a perfect father. Can he do it? Ferrari Ki Sawaari is a heartwarming story of small guys and their big dreams... And how one night changes their lives forever. Fasten your seatbelts. The joyride awaits...

It doesn't take 11 players to make a dream team. Debutant director, Rajesh Mapuskar, has a winning team with just three, plus a red hottie (Ferrari of course, we're not talking about boombaat Balan). Boman Irani, with his Parsi nuances, hunchback, slur, and a beautiful play of emotions ranging from despondency to exuberance, delivers a smashing performance. Paresh Rawal, in a small role, 'catches' you, right on. Sharman Joshi's performance is heart-warming, shuffling between light-hearted moments and tear-jerking emotions. Young Ritvik, like a true captain, holds the team together. This little stock of talent is so natural and expressive, he'll bowl you over. What tosses in its favour is the uniqueness of the concept (so what if you missed a ride with the real Sachin in his laal gaddi). Look at the brighter side of life, dikra.
Madhureeta Mukherjee, Times Of India - June 14, 2012

Ferrari Ki Sawaari has its great moments but falls short of being a great film. The dialogues by RajKumar Hirani entertain us with a handful of LOL-worthy moments. And that is the best that can be said about Ferrari Ki Sawaari. One or two brilliant moments, a handful of good moments but they don't come together to give us a great film.
Preeti Arora, Rediff.com - June 14, 2012

The protagonist’s battle against the odds lacks the dramatic horse power that could have sent the film zipping down the fast lane. The characters are lovable enough, but their little joys and setbacks, and the emotional ebbs and tides, dangle somewhere between reality and make-believe. Ferrari Ki Sawaari is a bit like a warm bear hug that eventually leaves you cold.
Saibal Chatterjee, NDTV - June 14, 2012

Ferrari works as a film. It’s a story of reaching for your dreams, of endearing father-son relationships, and of moral lessons that aren’t preachy. It’s a formula that rarely fails — the sort of feel-good movie that makes for perfect Sunday viewing with the whole family.
Sarit Ray, Hindustan Times - June 14, 2012