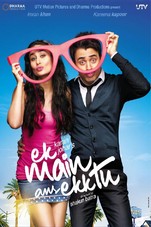 Rahul Kapoor (Imran Khan), 26, is on his way to become a carbon copy of his parents when he suddenly loses his job as an architect in Vegas. Afraid that he has let his parents down, Rahul decides to hide the truth and find another job. When by a twist of fate, he meets Raina Braganza, a quick-witted hairstylist, who is everything he isn't. A series of events lead them to meet on Christmas Eve over a few drinks... but like always, it's never a 'few'. Following this night of debauchery, they wake up to discover that they've gotten married. Now, Rahul has more than just his job loss to hide from his parents. They both decide to get it annulled as soon as possible and get an appointment from the court in ten days. Over the next ten days they have their share of arguments, moments and laughs that results in an unlikely friendship. Will this friendship turn in love? Will her warmth and fearlessness give Rahul the courage to face a long-simmering confrontation with his parents? Will a marriage that started as a drunken mistake help two people find themselves?

Imagine a guy who has lived his entire life based on decisions taken by his parents. Come to think of it, he's not living his life, but his parent's expectations. And then comes a girl who opens his eyes and shows him what he's missing out on. EK MAIN AUR EKK TU is more of a coming-of-age story, essentially. Intrinsically, EK MAIN AUR EKK TU may be a rom-com, but it's not anything that you may have witnessed on the Bollywood screen earlier.On the whole, EK MAIN AUR EKK TU is a slick, breezy and pleasant fare that should click with its target audience -- the youth -- and also has the potential to woo the older spectators as well. This take on love is refined, smart, lively and thoroughly pleasing thanks to its characters, conversations and the inherent humor. A perfect date movie. A film stuffed with exquisite moments that are sure to bring a wide smile on your face. Simply put, you cannot afford to miss EK MAIN AUR EKK TU. Just go for it!
Taran Adarsh, Bollywood Hungama.com - February 10, 2012

Ek Main Aur Ekk Tu shows what first-rate direction and a cute but brave script can do to the done-to-death story of opposites getting attracted to each other. EMAET has heart, charm and an enviable lightness of being. And it certainly helps that the lead players are in fine form.EK Main Aur Ek Tu is the sweetest heartbreak that Bollywood has conjured in a long, long time. It works both as a college buddy movie and a date movie; for the young and the not-so-young. You can even watch it alone. And if a gorgeous girl asks you for a drink, go ahead, take a chance. As Rahul will tell you, it will be worth every second of your life.
Avijit Ghosh, Times Of India - February 10, 2012

What's Good: The performances; the entertaining second half; the songs.

What's Bad: The lack of universality of the script which will find less appreciation among the masses.

Verdict: Ek Main Aur Ekk Tu is an entertaining and enjoyable fare for the city audience.

Watch or Not?: Watch it for the performances and the clever handling of a different story.
Komal Nahta, Koimoi.com - February 10, 2012

Shakun Batra's Ek Main Aur Ekk Tu is a coming-of-age film. Not for Kareena and Imran's characters, though, but for the industry and the audience. It's okay to say b-u-m without the beep. And talk sex among friends, without a beep. Admit it. Imran Khan as the vulnerable Rahul evolves in front of your eyes. From uptight to edgy, he goes from boy to man. Kareena takes up from where she left off in Jab We Met. I thought this was better.I'll go with three and a half stars for this film plus a half for the superb editing, so four out of five.Auntiji's do watch it.
Piyali Dasgupta, NDTV - February 10, 2012