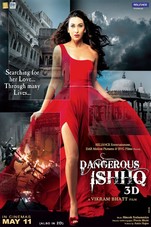 The makers of India's first Stereoscopic 3D movie 'Haunted 3D' now bring you India's first true 3D thriller 'Dangerous Ishhq'. Supermodel Sanjana (Karisma Kapoor) and Rohan, son of one of the nation's foremost business tycoons have been one of the most popular couples in the social circuit. When Sanjana decides against flying to Paris at the last minute- for a lucrative modeling assignment, she does so, not just because she cannot bear to stay away from her boyfriend Rohan, but more importantly because her instincts push her against going. But what her instincts cannot do is stop Rohan from getting kidnapped. The high profile kidnapping creates chaos in Sanjana's life. The kidnappers demand INR 50 crores. The Police however believe that even paying the ransom will not bring Rohan back. Time is of utmost essence. Death stares Rohan in the eye. It is in this extreme trauma that Sanjana discovers something extraordinary. She sees visions of them together- sometime in the past- in different eras. She is confused initially but in her visions lay definitive clues that could lead her to save the love of her life. As she follows clue after clue she gets closer and sometimes further away from the love that has been eluding her through the ages. An enticing suspense thriller, Dangerous Ishhq is Sanjana's tryst with Destiny. Would she be able to unravel the past to save her future? Would she be able to rescue her love and expose his true captors?

Watch All Videos of Dangerous Ishq

“ Watch it for Few Good Moments! ”

The strength of DANGEROUS ISHHQ lies is its attention-grabbing plot, which the Indian masses can relate to instantaneously. With Vikram Bhatt at the helm of affairs, who specializes in narrating taut thrillers, you can be assured of a riveting plot with several heart-in-the-mouth moments. But, alas, it's the screenplay that throws a spanner, with the over-stretched second hour and a formulaic conclusion ruining what Vikram had meticulously put together in the first half. On the whole, DANGEROUS ISHHQ is no patch on Vikram Bhatt's earlier achievements. This fantasy-driven film is an epic disappointment!
Taran Adarsh, Bollywood Hungama.com - May 11, 2012

At the concept level, Dangerous Ishhq does have something going for it beyond the stereoscopic 3D that it has been filmed in. The screenplay is consistent in its convolutions and the further back it goes in time the less sense it seems to make. Part of the time travel, one must confess, is intriguing, if nothing else. But the plot is riddled with moments that stretch credulity to snapping point. So is the film's toying with the theme of the past living on in the present. The two don't quite mesh seamlessly enough on the screen to make an impact. You could watch the film for one or the other reason. Karisma makes a fair fist of it. The plot is a problem. It is all over the place.
Saibal Chatterjee, NDTV - May 11, 2012

Talking about the 3D, after watching Dangerous Ishhq you will want to curse the guy who invented it and all those (Vikram Bhatt) who messed it up so badly thinking it was the coolest thing ever.Dangerous Ishhq is like watching a Dr Brian Weiss book in 3D, after about 30 pages, it gets monotonous and uninteresting.There's only so much curiosity you can have in somebody else's life. By the end of the ordeal you wish to be treated to a past life regression theory to find out what was it that drew you to it.
Blessy Chettiar, DNA - May 11, 2012

First of all, kudos to Vikram Bhatt, to bring forth such a complex concept with a decent amount of clarity. Otherwise, a smooth sail, as the transition from present to past lives is beautifully portrayed with minimal loopholes; the biggest hitch however, lies in the storyline.A flawless act by Karisma Kapoor, a crisp direction, intelligent editing and cinematography are the strengths. Some loopholes in the storyline, impactless dialogues, especially in the first half and the music are the weak points. Overall, with Dangerous Ishhq, Karisma Kapoor is back with her new innings as a powerful actor, who can prove to be troublesome for the reigning Bollywood beauties.
Daily Bhaskar, Dainik Bhaskar - May 11, 2012