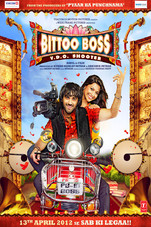 'Bittoo Boss' is a young charming, ingenious and a fun filled wedding cameraman who takes pride in calling himself a "Sesky Video Shooter". He is the star of all wedding celebrations of Anandpur Sahib, a small town in Punjab. Bittoo believes in spreading happiness through the beautiful moments he captures, moments which you can rewind and keep watching for years and smile looking at them thus making them heartfelt experiences which last forever. He falls in love with an educated and strong-headed girl who makes him realize the importance of financial stability and monetary gains in order to gain respect and recognition. Smitten in love and bitten by the one he loves, the smart and righteous cameraman is lured to take a shortcut in order to earn a quick buck and get his life back on track. What follows is a madcap ride.

Watch All Videos of Bittoo Boss

It's unfortunate that the same surefootedness that debutant director Supavitra Babul shows in setting up the narrative, disintegrates into a trite, preachy affair in the second half. The tone shifts when the plot twist is introduced - humiliated by the girl he likes ) for his simple ambitions and modest means, Bittoo takes the drastic decision to shoot pornographic videos toarn big bucks; he arrives in Shimla to secretly film honeymooning couples in hotel rooms. Bittoo Boss is an enjoyable enough ride until it goes off-track.I'm going with two-and-a-half out of five for Bittoo Boss. The film tosses around some interesting ideas, but can't seem to make them work as a perfect whole.
Rajeev Masand, CNN IBN - April 13, 2012

BITTOO BOSS has a fascinating premise, it appears bona fide as well, but not all concepts expand into entrancing fares. One anticipates a skillfully textured rom-com with flesh-and-blood characters, but what one gets to watch are caricatures. The slipup lies in its incoherent and erratic screenplay: the conflict doesn't work, the love story lacks fizz and the drama lacks the power to influence you. BITTOO BOSS is a clear case of unfulfilled promises. In the recent past, most debutant directors have had the courage to charter an innovative pathway. One expects the story and the execution of the written material to leave an indelible impression, but director Supavitra Babul doesn't get it right. Sure, the plot has potential, but the writing is lopsided and tedious and what makes it worse is the indolent tempo at which the plot unfurls.On the whole, BITTOO BOSS is a good opportunity lost.
Taran Adarsh, Bollywood Hungama.com - April 13, 2012

Debutant director Babul had an interesting premise to start with, but after the first half, the script is more scattered than sorted. Some caricaturish characters, dialogues with local tadka, and few laughable moments save the day. At a time when sex and 'dirty pictures' sell, Babul scripts a hero who describes sex as 'dilon ka milan.' Ho-hum!.This one had the potential to be an entertainer, but turns out to be a 'bit-too' much.
Madhureeta Mukherjee, Times Of India - April 13, 2012

Supavitra Babul's directorial debut Bittoo Boss, however, trying far too hard to be the next Band Baaja Baaraat, is a mostly amateurish effort which seems like relatively harmless fun before it turns sloppy. Leading man Pulkit Samrat brings some shaggy sincerity to the proceedings but is mostly surrounded by folks who can't act, and a sluggish, inexplicably banal plot. A sweet but slapdash effort, this is, all in all, quite like watching a wedding video. Just not shot by someone with as much panache as Bittoo. And a shaadi video -- one without folks you care about -- always, invariably feels groanfully long.
Raja Sen, Rediff.com - April 13, 2012