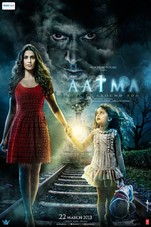 A story of a woman forced to face her fears and fight against a force over which she has no control and her biggest enemy is her own mind. Aatma is a haunting journey of a single mother Maya Verma who finally starts her life afresh with her six year old daughter Nia. As Maya starts to pick up the pieces of her life, strange things starts happening around her. Maya's six year old daughter Nia starts to speak to her dead father but Maya initially feels that she has created an imaginary father to fill the gap in her life. But slowly Maya's life starts to fall apart and the reality gets darker when she realizes that her husband is back to take that one thing he loved-his daughter. As the horrific journey unravels the battle to save her only daughter gets tougher and challenging. But she denies defeat even if the stakes are impossible.

Watch All Videos of Aatma

AATMA stands on a weak script. Besides, there are hardly any scares here. Disappointing!
Taran Adarsh, Bollywood Hungama.com - March 22, 2013

95 minutes have seldom felt so long, as they do while watching 'Aatma'. This curious but ultimately predictable supernatural thriller fails to escape genre conventions, falling into the same trap that so many of its predecessors have. This is death by boredom!
Rajeev Masand, CNN IBN - March 22, 2013

Aatma is meant to send shivers down the spine and shock the viewers out of their seats. All it does manage to do is set off a few mild waves of cold bemusement. Verdict: one star for gumption, one more for effort, but none at all for the rest.
Saibal Chatterjee, NDTV - March 22, 2013

The film offers some genuine scares and, in fits and starts, but lacks the sense of mystery, the element of surprise that’s essential for films in this genre. It’s not difficult to anticipate what’s going to happen next. I go in to watch Aatma with a nagging feeling that the trailer has unwittingly revealed the entire plot, “But surely, that can’t be it,” I reason with myself, only to be proved wrong in the end. Aatma comes across as an attempt to bring some credibility to the horror genre.
Nishi Tiwari, Rediff.com - March 22, 2013