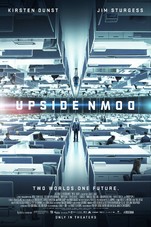 Ever since Adam (Jim Sturgess) and Eden (Kirsten Dunst) fell in love as teens, their bond has faced astronomical odds. The pair are separated not just by social class and a political system bent on keeping them apart, but also by a freak planetary condition: they live on twinned worlds with gravities that pull in opposite directions-he on the poverty-stricken planet below, she on the wealthy, exploitative world above. Their budding but illicit romance screeches to a tragic halt when interplanetary-border patrol agents catch them and Eden suffers an apparently fatal fall. But when, ten years later, Adam learns she is alive and working at a vast corporation whose towering headquarters connects their planets, he sets out on a dangerous quest to infiltrate the company and the upper world to reconnect with her. UPSIDE DOWN is a visually stunning romantic adventure that poses the question: what if love was stronger than gravity?(c) Millenium

Simply put, this is one of the craziest films to come along in a while and I can confidently say that anyone who sees it will either hail it is some kind of crackpot masterpiece or dismiss it as one of the silliest damn things they've ever seen.
Peter Sobczynski, Chicago Sun-Times - March 15, 2013

It doesn't really develop its story, or its themes. It doesn't truly draw out its characters. It evokes no serious emotions. It has - in the end - no gravity.
Stephen Whitty, Newark Star-Ledger - March 15, 2013

"Upside Down" is such a gorgeous wreck that I could almost sense Terry Gilliam somewhere muttering, "Wait a minute, I should have been the one to screw up this idea."
Kyle Smith, New York Post - March 15, 2013

"Upside Down" paints a pretty picture, as long as you don't think about it too much.
Michael O'Sullivan, Washington Post - March 15, 2013

Read More Reviews for Upside Down