The Time that Remains 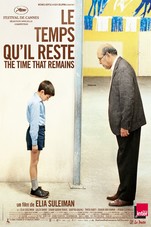 THE TIME THAT REMAINS is a humorous, heartbreaking film composed of elegantly stylized autobiographical episodes from the life of writer/director Elia Suleiman. The film explores life among the Israeli Arab community, and is shot largely in homes and places in which Suleiman's family once lived. Inspired by his father's diaries, letters his mother sent to family members who had fled the Israeli occupation, and the director's own recollections, the film spans from 1948 until the present, recounting the saga of the filmmaker's family in subtly hilarious vignettes. Inserting himself as a silent observer reminiscent of Buster Keaton, Suleiman trains a keen eye on the absurdities of life in Nazareth.

The Time that Remains Photos

View All Photos of The Time that Remains

The Time that Remains Videos

Watch All Videos of The Time that Remains